Family offices are standing on the precipice of a multi-trillion dollar transfer of wealth between generations, yet succession planning among family offices is moving at a glacial pace. What are the barriers to planning? And what should families be doing now?

The cautionary tale of India’s Ambani family should be enough to scare any patriarch or matriarch into succession action. The sudden death of Reliance founder Dhirubhai Ambani, aged 69, in 2002 sparked an acrimonious battle between his two billionaire sons, Mukesh and Anil, leading to the brothers splitting up the family business in a deal mediated by their mother. Today relations are civil, but the businesses they inherited have had very different outcomes.

Just as in family businesses, succession planning remains vital for family offices wanting to smoothly transfer their wealth and business empires to the next generation.

Yet for many, progress is glacial. Less than half of those surveyed in The Global Family Office Report 2018 (GFOR) have a formal succession plan in place.

An estimated $30 trillion in financial and non-financial assets is expected to pass from Baby Boomers to their heirs in North America in the next 30-40 years alone, according to Accenture.

While 70% of global families expect a wealth transfer to the next generation within the next 10-15 years, only 43% say they have a method in place to achieve this—only a one percentage point increase from last year.

Catherine Grum, head of family office services at KPMG, says while families acknowledge that early preparation is central to implement a successful succession plan, lack of time, and fear of complexity can be barriers for some families.

“Families know that to do a succession plan justice they need to set aside sufficient time and there are always more pressing issues that are higher up on their to-do lists,” Grum says.

“For other families it may be more complex—there is not an obvious plan that will make everyone happy and therefore they may be reluctant to open up Pandora’s Box. In these situations, the ultimate plan is likely to involve a number of compromises and it can be tricky to broker these without the involvement of a more neutral party.”

While family offices ranked succession planning as a key governance priority, virtually half (49%) admitted that they did not have a succession plan at all, the GFOR finds.

Regionally, less than half (42%) of families in North America have a succession plan, while European families are the most likely (47%) to have a plan in place.

One North American family office executive who took part in the study, but wished to remain anonymous, says it was the unexpected death of a senior family member that forced the family to develop a fully functioning and detailed succession plan.

The family’s plan involves a private family trust company set-up, with an investment committee staffed by external professionals, a committee to oversee distributions to beneficiaries, and a family council that rotates annually so all family members are involved with decision making.

“There definitely seems to be an air of confidence about the succession plan—its structure allows for a much smoother transition between generations and avoids any issues created by the death of key family members,” the executive says.

The need for succession planning is particularly stark in Asia-Pacific, where only 39% of family offices surveyed for the GFOR have a succession plan in place—the lowest proportion of any region. 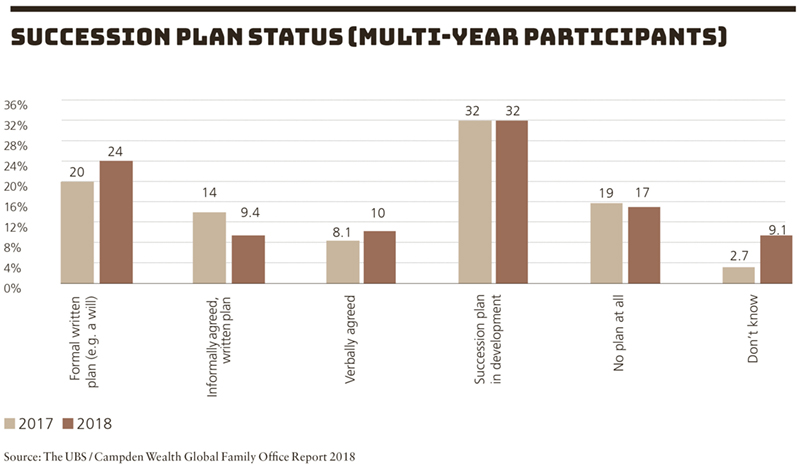 Jaydee Lin, chief operating officer and managing partner of the Hong Kong-headquartered Raffles Family Office which also has a presence in Singapore and Taipei, says the concept of succession planning is relatively new for Asian family offices as the majority are only first or second generation wealth holders.

“There is a lot of new wealth in Asia and there have been many family offices formed in this region in the last 5—10 years. The [family office] concept is becoming more mainstream, but it is still very nascent,” says Lin.

“Communication between generations can be challenging in this region, especially about death and succession planning. Depending on the family, sometimes it is preferable they engage external help to act as a neutral party to these discussions.”

Grum says communication between family members is key when planning for succession but members need to tread carefully when broaching the subject.

“Allow time for everyone to come round to the need to create a succession plan because often the discussions are initially broached by those who can see the impending precipice, but this perspective may not be shared by all,” she says. 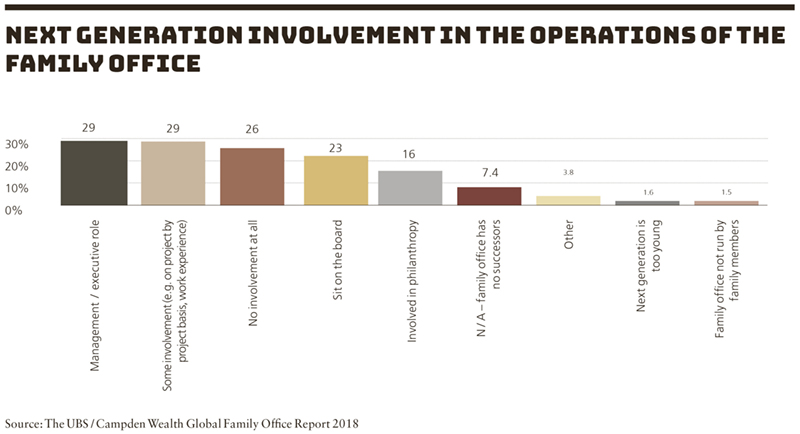 While many succession plans are yet to be formalised, the next generation have already started to take a more active role within many family offices, indicating the transfer is already in progress. Nearly a third (29%) of the next generation hold management or executive positions in the family office, while close to a quarter (23%) sit on the board, the GFOR reports.

Grum cautions that while preparing the next generation for the future by involving them in the family office management or on the board is to be applauded, formal succession planning needs to be tackled alongside their education to ensure stability.

“Do not hold out for the ultimate solution that completely meets every person’s objective. Multigenerational families are complex and there may need to be a number of compromises on all sides. Done is better than perfect.”