Seeking to escape the inflation of the 1970s, policymakers have inadvertently engineered an equally powerful deflation machine. Over the past 30 years, this has been mightily reinforced by the transformation of China’s economy and the impact of technology. Seeking to escape the inflation of the 1970s, policymakers have inadvertently engineered an equally powerful deflation machine. Over the past 30 years, this has been mightily reinforced by the transformation of China’s economy and the impact of technology.

Today, a financial system that is structurally intolerant of inflation faces a changing political-economy regime that makes inflation inevitable. The markets have wired themselves to the wrong inevitabilities. Asset and wealth managers – and their clients – need to be prepared for some of the most important changes for a generation.

Click here to article in full or see below for short summary.

Deflation occurs when there is a decrease in the general price level of goods and services in the economy. Over the past 30 years, there have been significant deflationary forces at work: China, technology and monetary policy.

China—gave businesses access to cheap labour and subsidised capital from China (and other emerging markets). This put downward pressure on consumer prices. Furthermore, to protect its exports China built huge foreign exchange reserves to suppress the value of its currency and ensure global competitiveness.

Monetary policy—each market crisis has been ‘cured’ by lower interest rates and, since 2009, quantitative easing. Policymakers’ intentions were to stimulate the economy to aid the recovery, however decades of loose monetary policy has failed to deliver sustainable economic growth. The question looms large – has monetary policy run out of road? 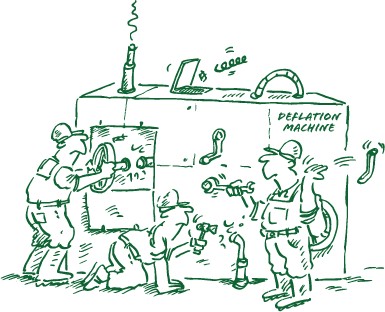 Where has all of this left the economy?

Ten years on from the financial crisis and the economic recovery has been anaemic, yet we’ve seen a prolific rise in asset prices. Loose monetary policy has supported asset owners and those with capital to deploy but it has failed to meaningfully kick-start the real economy. In most developed countries there is rising political unrest in no small part due to the inequality between the ‘haves’ and the ‘have-nots’. Monetary policy has exacerbated the rise of populism by focussing on Wall Street, not Main Street.

Meanwhile, following a decade of accommodative policy, the financial system has become addicted to low interest rates and a central bank that has its back. When the US tried to tighten monetary policy in 2018, equity markets fell sharply and the US Federal Reserve was forced to promptly reverse course. It is as if the doctor upped the dosage of a favourite drug, to as strong a dose as dared. The patient did not fully recover and relapsed as soon as treatment started to be withdrawn. Now, even the doctor is beginning to doubt the drugs.

It isn’t controversial to say monetary policy is almost out of road. Not only because it is theoretically out of road, but also because policymakers are beginning to see that we’re on the wrong road. Central banks are backing away from the idea of deeply negative interest rates. Instead they are calling on governments to use fiscal policy more actively. To us, this signals the dismantling of a deflationary machine.

Prepare for an inevitability

Governments, hesitant at first due to the example set by Greece, are coming around to the idea of fiscal spending. What an excellent way to solve their political woes; healthcare costs for an ageing population, climate change, pension deficits, wealth inequality and the rise of populism – all solved by printing money.

While the financial system is geared-up for ‘lower for longer’ and the deflation narrative, in the political sphere there is demand for a change to the status quo.

To predict an end to deflation is to predict dislocative markets—unseen since the de-rating of equities between 1972 and 1975. A financial system which is now structurally intolerant of inflation faces an economic regime change which makes inflation an imperative.

To quote my colleague Peter Warburton:

“Inflation, long viewed as an ancient peril to be eradicated, has been re-cast as the agent, probably the only viable agent, of income and wealth redistribution.”

What might be good for the economy, could be bad for markets…

Related Content:
Behind the illusion of stability
Is the UK at the start of a mini-boom?