Over the last 20 months, family businesses have experienced unprecedented levels of disruption caused by outside forces. Certainly, Covid-19 has been the leading cause of this turmoil, but a confluence of economic, geopolitical and environmental threats has also caused savvy families to galvanise around resource preservation and the enhancement of family cohesion and reputation. Over the last 20 months, family businesses have experienced unprecedented levels of disruption caused by outside forces. Certainly, Covid-19 has been the leading cause of this turmoil, but a confluence of economic, geopolitical and environmental threats has also caused savvy families to galvanise around resource preservation and the enhancement of family cohesion and reputation.

As a family therapist, I’ve been impressed by the efficiency with which families have pivoted towards innovative strategies that protect them from external threats. I’ve also been impressed by a significant number of families who’ve developed strategies to protect their enterprises from disruptive forces that emanate from within the family itself.

Two of the most disruptive of these internal forces are an unexpected death in a marriage or when a marriage within the family moves in the direction of a divorce. In these situations, the potential for harm to a family enterprise becomes acute. Not only must the family contend with feelings of loss and betrayal, they must also manage these disruptive events in a way that does not tarnish their reputations in the social, business and religious communities in which they will continue to exist.

Prevention is better than cure

During the various iterations of Covid-19, I’ve seen a significant increase in families of distinction being proactive in taking preventive measures to minimise their internal risks. The measures they are taking are the direct result of their heightened awareness of the fragility of life and a deeper appreciation for the delicate membrane that separates an orderly life from the uncertainty and chaos that can destroy it. These families are smart enough to know that while uncertainty will always be a part of life, there are actions they can take to move their families to higher levels of functioning when disruptive events transform it. 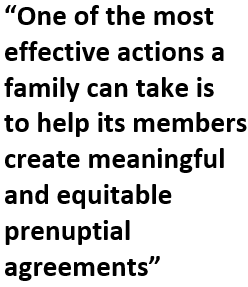 As this relates to divorce and death within a marriage, one of the most effective actions a family can take is to help its members create meaningful and equitable prenuptial agreements. The goal of these agreements is not to assert power in a punitive way, but rather to prevent destructive conflicts, to preserve the family’s religious and cultural dignity and to honour the contributions a spouse has made to their immediate and extended family.

Over the years, however, I’ve witnessed prenups being approached through a highly destructive path. This path is travelled on a transactional rather than relational footbed. As such, it insults rather than honours, excludes rather than embraces and divides rather than uniting. I’m also happy to report that significant change is occurring in the ethos of family governance.

Over the last five years a new stable of what I call Second Generation Family Governance Professionals (SGP) are giving considered thought to the intrapersonal, interpersonal, cultural and religious considerations that arise in family governance issues. These SGPs recognise that while documents and agreements are of value, unless the conscious and unconscious psychic dynamics that underly them are properly addressed in a safe and strategic frame, the documents produced will gather dust and invoke hostel and retaliatory reactions from the family members they are intended to serve.

The notion that psychological and relational issues of ultra-high net worth families need to be addressed through the three considerations mentioned above is one that I developed in my book, Fragile Power, and recently honed in a chapter for a special edition of Globe Law and Business.

It relates to the creation of effective prenuptial agreements in the following three ways:

1.            The intrapersonal: This is a psychological construct that refers to how a person views their agency in the world. In the context of a prenuptial agreement, the key consideration is determining the intended spouses’ loci of control. Research, including my own, has shown that first generation wealth creators have what’s known as a robust internal locus of control. The feel like they are masters of their world and are confident if they lost their fortune, they could make it again. Subsequent generations typically have what’s known as an external locus of control. They struggle to find their identities in the world. They are terrified of losing their money and have no idea how they would support their selves and their family much less remake the family fortune if it were to disappear.

2.            The interpersonal: The key consideration in this realm is how value will be provided and exchanged in the marriage. Here, it’s important to be hyper aware of the historical devaluation that occurs around what are seen as feminine contributions to a relationship and family such as nurturing and emotional support. It’s also important to be aware of the stereotypical and demeaning assumptions that are made about feminine voices who assert their value in relationships where there is a disparity of wealth.

3.            The sociocultural: Life occurs in a context. For family businesses, the context in which they operate is complex and nuanced. As this relates to the creation of a prenuptial agreement, families must consider the significance of a death or divorce in their religious and secular communities. Muslim families will take guidance from Sharia Law and Christians from their scriptures. The ultimate goal should be the creation of an agreement that keeps the dignity of the family’s religion and community reputation at the forefront of their negotiations.

One of the most common responses I get when I talk about my innovative work in the realm of prenuptial agreements is, “Isn’t that difficult.” My answer is an unequivocal yes. Assisting families in processing the raft of psychological issues that arise in creating meaningful prenuptial agreements is difficult indeed.  But the mastery over the difficult areas of life is a skill that enables successful families surpass their rivals. They are also the areas that provide alpha returns on their family capital. For this reason, rather than approaching the creation of prenuptial agreements with trepidation, embrace them as vehicles to enhance relational functioning and as opportunities to master the art of family engagement. By walking down this relational rather than transactional path, prenuptial agreements will not be liabilities to dread, but rather assets that will enhance a family’s relational well-being and business successes.

Paul Hokemeyer, JD, PhD is a licensed marriage and family therapist and founding principal of Drayson Mews International, a mental health collective focused on the well-being of ultra-high net worth and celebrity families.