The family of late Samsung patriarch Lee Kun-hee has unveiled an instalment plan to pay its 12 trillion won ($10.8 billion) inheritance tax bill, to include large donations to South Korean healthcare and museums.

“It is our civic duty and responsibility to pay all taxes,” the Lee family said in a statement via Samsung Group last week as Lee’s four heirs revealed how they planned to pay one of the largest inheritance tax bills in history. They had six months from the death of South Korea’s wealthiest man, at the age of 78 in October 2020, to explain how they would manage the state’s hefty 60% inheritance tax bill on his $21 billion wealth in stocks and assets.

The family said it intended to pay the bill over five years in six instalments, starting just before their deadline of 30 April, 2021. They would donate KRW 1 trillion to public medical facilities and research, as well as 23,000 works of art and antiques from the patriarch’s collection to national galleries.

Their plan was watched closely in South Korea in the expectation the heirs would be forced to liquidate their controlling stake in the chaebol.

The eldest child and only son of Lee Kun-hee (pictured right), the second-generation chairman of Samsung Group, is Lee Jae-yong (pictured above), 52, also known as Jay Y Lee. He inherited the bulk of his father’s shares, consolidating his control over the country’s largest conglomerate.

The heir and his mother, Hong Ra-hee, 75, are interested in securing personal credit loans from banks to finance the bill, according to South Korean media. Approval for a loan of $450 million looks likely to be forthcoming for Lee Jae-yong, despite his imprisonment since January 2021 for two and a-half years on bribery and embezzlement charges.

Samsung Electronics, the group’s flagship, reported in late April its financial results for the first quarter of 2021. Revenue was KRW 65.39 trillion ($58.7 billion), up 6% on the previous quarter and a record for the first quarter in general. Sales of smartphones and devices increased while demand remained strong for digital appliances and premium televisions, the company said.

Leonardo Ferragamo has called on the entire Italian fashion family business to develop the “immeasurable potential of our brand” as he accepts the chairmanship from his brother Ferruccio Ferragamo.

Leonardo Ferragamo (pictured left), 67, the fifth of six children by late founders Salvatore and Wanda Ferragamo, was formally appointed as the new non-executive chairman of parent company Salvatore Ferragamo by its board of directors in late April 2021.

Michele Norsa, 72, the trusted non-family adviser brought back to help the family business recover from Covid-19 disruption, returned as executive vice chairman. Giacomo (James) Ferragamo, 49, son of Ferruccio Ferragamo, returned to the board after vacating a seat for Norsa one year ago. Angelica Visconti, 70, daughter of the late Fulvia Ferragamo and sister of Ferruccio, also became a director.

The board slimmed down from 13 to 10 members, as it proposed in January 2021. The three family members and their ally Norsa will sit around the table with four independent directors and Micaela le Divelec Lemmi, the non-family chief executive since 2018. Directors serve a term of up to three years although they can be re-elected.

Leonardo Ferragamo said it was with “immense honour and a deep sense of responsibility” that he took the chairmanship. The position had been held by his father until his death in 1960, then for many years by his mother, before becoming his brother’s for the past 15 years, he said.

“With dedication and passion, I will strive to let their teachings and values be my guide, along with those that my family has conveyed to the company and those that our so many wonderful employees in Italy and abroad have upheld, earning for our brand, over the years, with their tireless work, vision and enthusiasm, the respect it deserves around the world.

“It is precisely this intensity that I know the entire company will be able to draw on for the passion, pride and clear-headed determination it needs to continue on this path and develop the immeasurable potential of our brand, even in these particularly challenging times. I will work alongside them and the new generations with all my energy.”

Ferruccio Ferragamo (pictured right), 74, the eldest son who joined the family business in 1963, stepped down as chairman. He remained president of the family’s Milan-listed representative holding company Ferragamo Finanziaria, which owns 54.3% of Salvatore Ferragamo.

Ferruccio Ferragamo thanked employees for their loyalty. He praised his mother as the true architect of Salvatore Ferragamo’s international success.

“The example she set and her teachings have been invaluable to me throughout this long journey,” he said.

“I am passing the torch to my brother Leonardo with the knowledge that he will continue to guide the company upholding the principles and values that have always defined our family."

Robert Buchbauer, the fifth-generation head of Swarovski, has vowed to put sustainable environmental and social initiatives at the heart of the Austrian jewellery family business.

A year after his appointment as chairman and chief executive in the midst of a simplified management shake-up, Buchbauer (pictured left), 55, declared the new commitments in late April. Progress on its six initiatives would be tracked by the crystal maker in regular sustainability reports.

The great-great grandson of founder Daniel Swarovski (pictured below) said after a turbulent year which had affected everyone, it was important Swarovski took stock of its place in society and evaluate the contribution it made.

“We cannot return to business as usual,” Buchbauer said.

“Since our founding in 1895, a love of people and the environment have been integral parts of our DNA. While over the years we have achieved notable progress in addressing the world’s most pressing issues, we recognise this is no longer enough.

“Now, we are reinforcing our commitment to progress and action in sustainability. Only by challenging the status quo and striving for positive change in every facet of life, are we able to ignite our true potential.” 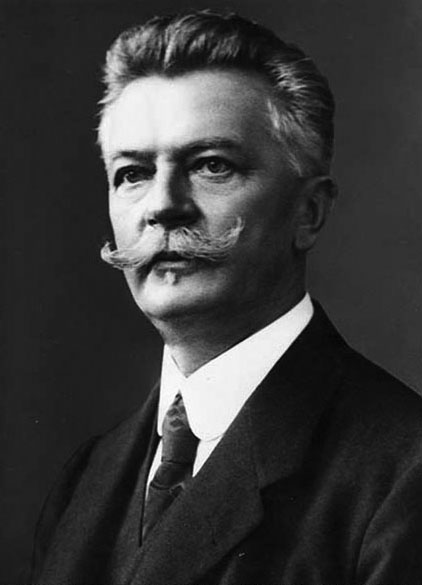 In the six drives, Swarovski would reduce its greenhouse gas emissions across its entire value chain by 2030 via participation with the Science Based Targets initiative. The family business pledged to improve the sustainability of its products, including responsibly sourced and recycled raw materials, while reducing waste and adopting circular business models.

Swarovski reaffirmed its foundations of equality and inclusivity and would champion diversity and individuality. The company ensured a safe and healthy working environment compliant with global standards set out by the International Labour Organisation, the United Nations and the Responsible Jewellery Council.

“We are proud to be a business filled with exceptional talent,” Buchbauer said.

“To reach our goals, we’ll need to call upon all of them—progress and action in sustainability depends on us dreaming and challenging the status quo together. We need the brilliance of engineers and scientists combined with the magic of our people to make change happen.

“For all our futures, we are determined to make the Swarovski name synonymous with excellence in sustainability.”