Family offices in North America have seen their wealth and returns soar past Asia-Pacific and European contemporaries, despite the Covid-19 pandemic, as their expanding vehicles act on their confident economic outlook and eye cannabis investments and fintech transactions. Family offices in North America have seen their wealth and returns soar past Asia-Pacific and European contemporaries, despite the Covid-19 pandemic, as their expanding vehicles act on their confident economic outlook and eye cannabis investments and fintech transactions.

A remarkable 86% of North American family offices said their wealth increased over 2020-21, comfortably ahead of the global average of 79%. Their assets under management increased 58%, a slight dip compared to the 61% global average.

“I feel quite optimistic,” the chief executive of a single family office in Ontario, Canada said.

“Our portfolio of investments and our principal investment have all done well over the last 18 months.”

These original findings and more are revealed in the new flagship Global Family Office Report 2021: Regional Series North America Edition by Campden Wealth with the Royal Bank of Canada, which launches today.

Barely one-third, or 31%, of North American families told Campden Research in 2019 they favoured a growth-orientated investment strategy, but now 45% said they opted for that approach. Their shift paid off, with the average family office portfolio return achieving 15%, more than the global average of 13%.

With more wealth the greater the need for resources to manage it. North American families said they significantly expanded their offices, structures and services over the past 12 months. Information technology infrastructure saw the biggest growth, at 45%, which chimed with the growing popularity of transactions using financial technology. A third, 34%, of respondents said fintech played a role in their dealings, but almost double the number, at 61%, agreed fintech would probably replace traditional banking services in the future.

Almost one-quarter, 24%, of families took advantage of the legalisation of cannabis around North America to invest in the sector, more than the 18% global average. Some 41% agreed cannabis could be a promising investment that family offices should consider, again ahead of 33% of global peers. 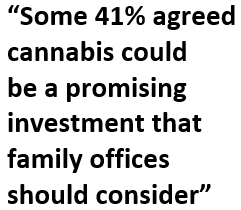 The principal of a private multi family office in Florida told Campden Research the time to invest in cannabis was two to three years ago.

“There were some family office club deals available to buy up a lot of the growers and the hydroponic guys,” the principal said.

“That was the time to do it. We didn’t, but I know other family offices that did, and they’ll end up doing well. Now, I don’t know how to invest in it as an individual family office, so we haven’t.”

However, healthcare was by far the most popular area for investment for 74% of North American families, followed closely by biotech, at 64%, fintech, at 61%, and artificial intelligence, at 49%. 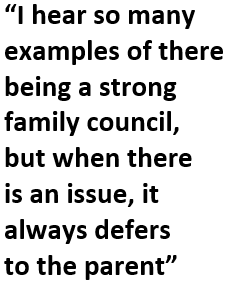 In turn, more than half, 55%, of North American family offices said their next generation was either somewhat (41%) or very (14%) unprepared to take over control. Almost one-third, at 30%, said the biggest obstacle in succession planning was the reluctance of the patriarch or matriarch to make way for their next-gens.

“I hear so many examples of there being a strong family council, but when there is an issue, it always defers to the parent,” the managing director of a private multi family office in Massachusetts said.

“So, the next gen never learns the necessary tools to succeed. That’s why you see members of the next gen fail.”