European family offices are more optimistic about the economic outlook for 2022 than Asia-Pacific and North American peers and more than half of continental families are open to new investment opportunities. European family offices are more optimistic about the economic outlook for 2022 than Asia-Pacific and North American peers and more than half of continental families are open to new investment opportunities.

The wealth of most European families increased over the past 12 months and their family offices expanded and matured in structures and services. However, investment returns for European families lagged behind their global counterparts. Just over half of European families have a succession plan in place and have a low opinion of how ready their next generation of family members are to succeed.

The principal and family member of a single family office in the United Kingdom and Russia told Campden researchers he was feeling “very positive” about the quick recovery.

“The fiscal response has been much better co-ordinated than I think on any previous occasion in the last 20-30 years,” the principal said.

“Governments have shed their obsession with fiscal responsibility, rolled up their sleeves and done their job to support people through this. There is some lasting change in that the pandemic accelerated certain trends which were there before, but it doesn’t look like there was lasting damage, as the furlough scheme preserved the labour market fairly well.”

Yet European families admitted their investments generated an average return of 12%, which underperformed compared to Asia-Pacific and North American families, at 15% each, and the global average of 13%.

The European appetite was growing for private and public equity deals—51% planned to allocate to direct private equity investments, 43% to private equity funds, 24% to developed market equities and 22% to developing market equities. The report said disaffection for fixed income was likely to continue, with 18% planning to reduce their exposure to major government bond markets.

“Healthcare, renewable energy, FinTech and biotech—those are our themes,” the chief executive and family members of a single family office in Monaco told Campden Research.

“We’ve targeted a couple of what I call thematic funds that are into at least three of those areas and we may add others, perhaps cyber security and 5G networking. Here, we would prefer to invest in a fund rather than individual investments.”

European family offices were more cautious than their worldwide counterparts when it came to cryptocurrency. The digital currency accounted on average for only 1% of European portfolios and while 17% planned to allocate more in 2022, Europeans trailed peers in North America (24%), Asia-Pacific (35%) and the global average (25%).

Inflation was pegged as the greatest market risk over the next 12 months for 70% of European families with rising interest rates a concern for 55%. Looking further ahead, investment risk was the biggest hazard for 79% of European family offices over the next 3-5 years yet unpreparedness for succession was considered less of a risk at 33%. 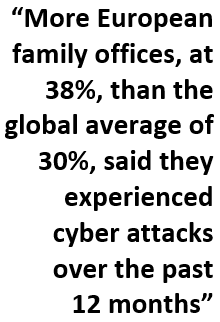 A growing threat was cybercrime. More European family offices, at 38%, than the global average of 30%, said they experienced cyber attacks over the past 12 months. However, only 19% described their cyber security plan as “robust” while 37% said their plan “could be better” and 34% had no plan at all.

The principal of a British single family office told Campden Research the second generation knew and were committed to their roles, “so we don’t have to worry what happens when the first generation is no longer there.

“Both generations are currently heavily involved in giving the family office directions. If there are investments to be made or money to give out, they are heavily involved. I expect that will not change once the next generation takes over.”