Expressions of gratitude and grief paid to the passing of a head of family and state adored by generations. Tributes have been paid following the passing of Her Majesty Queen Elizabeth II, the long-reigning monarch of the United Kingdom and Commonwealth, who has died surrounded by her beloved family at Balmoral Castle, aged 96.

The longest-serving Monarch in British history, The Queen famously broadcast to the world on her 21st birthday, “I declare before you all that my whole life whether it be long or short shall be devoted to your service.”

An astonishing reign of more than 70 years followed, in which she raised a family and led her subjects through some of the most tumultuous times in history.

"[Today is] a moment of the greatest sadness for me and all members of my family," said The Queen's eldest son and heir, Charles, the former Prince of Wales who has now become King of the United Kingdom and 14 Commonwealth realms.

“We are all devastated,” said the newly appointed English prime minister Liz Truss outside Number 10 Downing Street. “It is the passing of the second Elizabethan age. The Queen was the rock on which modern Britain was built.”

Born in Mayfair, London, on April 21, 1926, as the first child of King George VI and Queen Elizabeth, Princess Elizabeth was raised to the rank of heir presumptive following her father’s coronation in the wake of King Edward VIII’s abdication. From a young age, The Queen demonstrated a strong desire to serve the public by joining the Auxiliary Territorial Service during the Second World War.

At the age of just 25 and following the death of her father in February, 1952, Princess Elizabeth became queen regnant of seven independent Commonwealth countries: the United Kingdom, Canada, Australia, New Zealand, South Africa, Pakistan and Ceylon (known today as Sri Lanka), as well as Head of the Commonwealth.


Queen Elizabeth II making a speech Waitangi, New Zealand, in December, 1953, with Prince Philip by her side

The Queen’s marriage to Philip Mountbatten, a former prince of Greece and Denmark, lasted for 73 years until his death in April, 2021. Described in The Queen’s own words as her “Strength and stay” during her reign, they had four children together: King Charles; Anne, Princess Royal; Prince Andrew, Duke of York; and Prince Edward, Earl of Wessex.

As a matriarch, The Queen shepherded her family through many traumatic events, including the breakdowns of her children's marriages, her famed annus horribilis in 1992 and the death of her former daughter-in-law Diana, Princess of Wales, in 1997.


Queen Elizabeth II on a state visit to Alberta, Canada, in 2005

Throughout her rule as the second-longest reigning sovereign monarch in world history, support for the monarchy in the United Kingdom and The Queen’s personal popularity remained consistently high.

“HRH Queen Elizabeth II was a truly remarkable monarch, matriarch and leader who was an inspirational role model to her family, the United Kingdom and the Commonwealth,” said Dominic Samuelson, chief executive officer of Campden Wealth. “The ambitious and truly groundbreaking endeavours undertaken throughout her reign have positively impacted multiple generations across the globe.”

A dedicated public servant, with links as royal patron or president to more than 600 charities, military associations, professional bodies and public service organisations, The Queen carried out her public duties against the backdrop of a rich family life which has welcomed many grandchildren and great-grandchildren to the royal family. 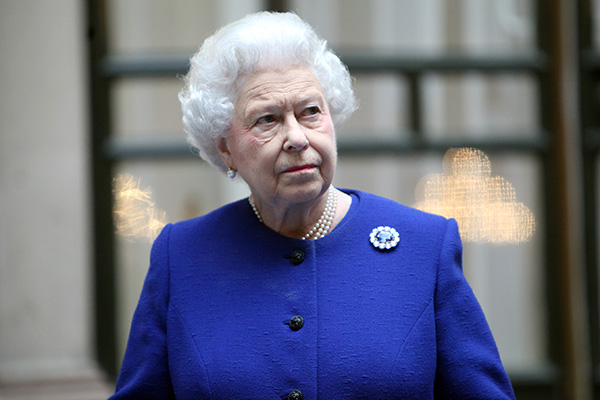 Queen Elizabeth II at the Foreign & Commonwealth Office in London in December, 2012

“Her Majesty Queen Elizabeth II embodied the British nation's continuity and unity for over 70 years,” said French president Emmanuel Macron. “I remember her as a friend of France, a kind-hearted queen who has left a lasting impression on her country and her century.”

“Throughout her remarkable 70-year reign, she led Britain through transformations with unfailing grace, dignity and genuine care for the welfare of all its people,” said former US president Bill Clinton.

“We have lost not just our monarch but the matriarch of our nation, the figure who more than any other brought our country together, kept us in touch with our better nature, personified everything which makes us proud to be British,” said former English prime minister Tony Blair.

“I will never forget her warmth and kindness. During one of our meetings, she showed me the handkerchief Mahatma Gandhi gifted her on her wedding. I will always cherish that gesture,” said India’s prime minister Narendra Modi.

“Our thoughts are with the royal family and all those who mourn Queen Elizabeth II in the UK and worldwide,” said European Council President Charles Michel. “Once called Elizabeth the Steadfast, she never failed to show us the importance of lasting values in a modern world with her service and commitment.”

“The death of Her Majesty Queen Elizabeth is a profoundly sad moment for the UK, the Commonwealth and the world,” said Scotland's First Minister Nicola Sturgeon. “Her life was one of extraordinary dedication and service. On behalf of the people of Scotland, I convey my deepest condolences to The King and the Royal Family.”

As the United Kingdom and Commonwealth enters a period of mourning, there will be an expected ten days between The Queen's death and her state funeral at Westminster Abbey, which is anticipated to be attended by state officials from all over the world.

“I feel enormously proud of what the Commonwealth has achieved, and all of it within my lifetime,” said The Queen in her Commonwealth Day message in March, 2015. “For more than six decades of being Head of the Commonwealth, a responsibility I have cherished, I have had the fortune of the constancy of The Duke of Edinburgh. Prince Philip has brought boundless energy and commitment, for which I am indebted. Nor could I wish to have been better supported and represented in the Commonwealth than by The Prince of Wales who continues to give so much to it with great distinction.”