I’d like to teach the world to fish: Percy Barnevik on addressing poverty

Percy Barnevik made his name heading up one of the largest family-controlled businesses in Europe, but in his retirement it is microenterprises where he has focused his attention. Jessica Tasman-Jones caught up with the former executive to find out how his foundation, Hand in Hand International, is addressing poverty one job at a time The solution to a great deal of the world’s problems is jobs, argues Percy Barnevik. “In Egypt 75% of the students don’t get a job. The young men sit in the cafés in Cairo, unhappy, angry, they can’t support themselves, let alone a small family.” This breeds anger and they become prey for the Muslim Brotherhood and all types of violent organisations, says the former business executive. “The problem is not Islam, not the Bible, the problem is not religion. The problem is poverty and hopelessness.”

His rhetoric is backed up by research. Forty per cent of rebel group members claimed unemployment and idleness were their principal reasons for fighting, a global survey conducted by the World Bank in 2011 found. The development bank ranked unemployment as one of the top crises for humanity after conflict, climate change, and water. 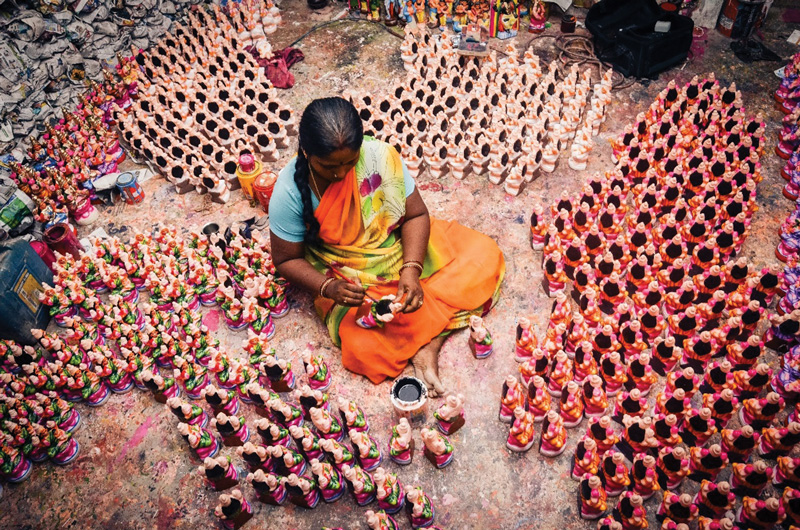 Hand in Hand International, founded in 2003, seeks to address this joblessness and hopelessness through enterprise. Not the type of enterprise Barnevik was accustomed to as the former CEO of Swiss engineering firm ABB – in which the Wallenberg family hold a 10% stake. (He helped create the industrial giant through a merger of Asea and Brown, Boveri & Cie in 1988 earning him comparisons to General Electric’s former CEO Jack Welch.) Instead, Hand in Hand assists those in poor communities improve their incomes through microenterprise – think a bicycle repair shop or a woman weaving rugs to sell at markets in Afghanistan. While these may seem comparatively humble to a European multinational, the foundation has created 2.42 million jobs to date – a figure that rivals Walmart for employee size.

Barnevik wants to address poverty on a large scale. “Muhammad Yunus received the Nobel Prize for microfinancing. I thought ‘if that type of loan arrangement can help hundreds of people, why can’t it be done for millions of people?’ I like big numbers, I don’t want to have one school for 100 women, I want to go for millions. If I can’t impact many, many people, I’m not interested. A lot of charity work today involves one school for a hundred children, whereas we have moved 260,000 children out of labour to start attending school. We must strive for bigger scale.”

For the year ending 2015, the foundation had created 295,315 businesses leading to 357,623 jobs. It is called Hand in Hand because it seeks to give people a hand up, not a hand out. People are given training and access to microloans to create employment for themselves. “They’re only allowed to use that money for income generation, like buying a sewing machine and other equipment,” Barnevik says. “You’re not allowed to use the money for consumption, as that will lead to nothing.”

Though Hand in Hand is just over a decade old, Barnevik first encountered poverty when he was a young professional many decades ago. “When I was 28 years of age, I went on a business trip to Mumbai, and saw the ghetto there. It was built for one million people, but 12 million people lived there, most of them out in the marshland, without clean water. There I saw dead people in the night, on the streets. Trucks came, they loaded up the bodies in the back and then threw them into the garbage pits. People didn’t even look at what was going on, it was part of daily life. So when I saw that misery early on in my career, I felt touched by it.” 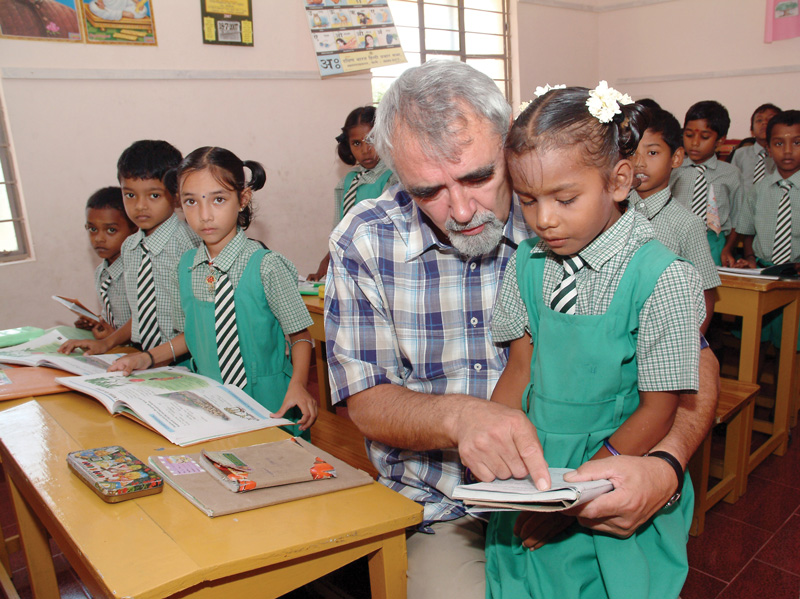 Barnevik had initially paid to untie individual children from their labour so they could go to school – which cost $150 each. “It always affects you when you see children abused – not going to school, but instead working, and getting sick too.” His retirement – he received a multi-million dollar golden handshake from ABB – afforded him the opportunity to establish a more sustainable way to help. “When I was 60, I decided that instead of continuing my memberships on big company boards for the next 10, 15 years, I should use my money – $60 million – my time, my contact network, and make an all-out effort to mobilise poor people into entrepreneurship.” Barnevik had served as chairman of Swedish construction giant Skanska and UK-based pharmaceutical company AstraZeneca, and on many other multinational company boards.

Hand in Hand may at a glance seem like a microfinance operation, but its work is much more holistic than that, Barnevik points out. “It doesn’t help to receive a microloan if you can’t read, or write, or do simple maths. So, we start by teaching people those elementary skills in order to become entrepreneurs. Then we coach them to work in groups, to support each other. We train them to save money, even small amounts, so that when they start an enterprise, we can help them to get a small microloan. This is followed by coaching in marketing, how to package, how to price, and how to avoid bad middle men. We often link up our groups to garment factories, who buy the produced goods to export to Europe, or Japan, or America, something which our members are unable to do themselves.”

Poverty alleviation is a complex area for philanthropists to tackle – indeed microfinance has had its own controversies with reports of several dozen farmers in the Indian state of Andhra Pradesh reportedly committing suicide in 2010 after being unable to repay their debts. According to the Global Family Office Report 2015 36% of family offices list poverty as a cause they support through their philanthropy.|

Philanthropic strategies to address poverty have evolved throughout the years, says Angela Kail, head of the funders team at charity think tank and consultancy New Philanthropy Capital. She says it’s moved from giving physical items, like food or wells, to a more “teach-a-person-to-fish type of approach”. “Poverty is a symptom and quite often philanthropists would prefer to go for the root cause, which might be education, for example, depending on the country. Sometimes it’s such a big issue they can’t get a handle on it. One of our big clients puts a lot of money in water and sanitation, tackling one particular aspect of poverty, rather than trying to tackle the whole thing at once.”

Barnevik says: “To give people money, clothes, and food is not sustainable. We must stop giving before the poor people are back where they were.” “If you have an emergency like an earthquake, tsunami, volcanic eruptions, sure you have to bring water etc, you have to help them. But we are not dealing with emergency help, that’s where the Red Cross and some others help. We are there for the long-term build-up, generation after generation.”

The foundation’s work in Afghanistan, a country that many philanthropists are reluctant to work in, despite being an area of extreme need, is described as a real positive by Kail. “It can be really easy for charities to focus on countries that are much easier to work in, but obviously that leaves behind huge areas of work. A lot of clients we’ve spoken to have been balancing whether their donations should go to Afghanistan or India. You might be able to have the most results in India, but you might not necessarily be helping the neediest people.” 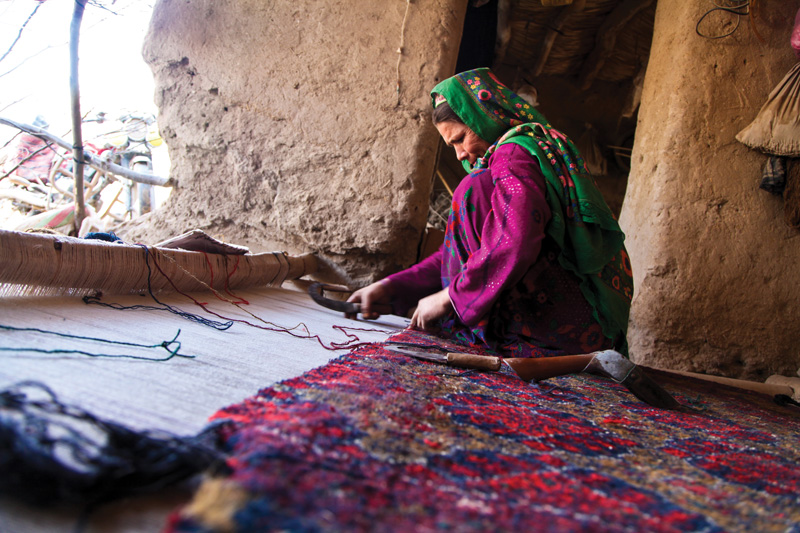 In 2014 Hand in Hand received a game-changing $1.2 million grant from the Delegation of the European Union to Afghanistan. It allowed the foundation to expand into the Samangan Province where it aims to help 8,100 entrepreneurs increase their incomes by up to 30%. Twelve months in to the two-and-a-half year programme, it had recruited 5,707 members – 73% of whom were women – much higher than the government’s usual target of 35%.

“I’m no longer dependent on my husband’s income and I can easily purchase clothes and school materials and take my children to the doctor,” said one woman from the country’s Nahri Shahi district. Named Najia (like many Afghans she has no last name), she increased her income from zero to 40,000AFN ($720) a month by making canned meals that she sells in neighbouring villages. She recently started supplying to the Ariana Supermarket and hopes to soon hire her 18 part-time staff fulltime. A recent review by the Swedish International Development Cooperation Agency (Sida) found female micro-entrepreneurs spoke more about the value of training and savings than their male counterparts, and described the newfound sense of freedom that came from their entrepreneurial work. Barnevik adds that female entrepreneurs are favoured by banks because of their high repayment on loans. “They are well trained in their jobs, they use the money for income generation, not for consumption, all these things put together contribute to very, very high repayment rates.”

Families play an important role in the charity. Lagos family business Kewalram Chanrai Group commited $150,000 to it last year, which aims to create 2,440 jobs. There are important families represented on the board, including Lady Lynn Forester de Rothschild, and Jonas af Jochnick, and Hand in Hand has received funding from families behind big businesses such as Maersk and Tetra Pak. “The problem isn’t money, the world is flooded with money. It’s a matter of getting hold of it and using it in the right way,” Barnevik says. In 2014/15 it raised $5.6 million, up 38% on the previous year. Hand in Hand isn’t alone in its endeavours, working with various aid agencies, including UK’s Department for International Development (DFID) and Sida. “Why not just have 100% private donations? Well, I think it’s good to also generate funds from some of these big organisations because I want to tempt them to move in the same direction, to get other NGOs to follow at our pace, to follow in our tracks.” Barnevik’s vision for the foundation’s work is not stop-gap measures. In 2014 he stood down as chairman of Hand in Hand and now oversees the foundation’s work in an honorary role. “If we close Hand in Hand tomorrow, if I die in a week, these one and a half million enterprises continue operating, they don’t depend on us, they don’t say ‘oh please give us money, please help us’.”

Related Content:
Generation gap: why Millennials have hooked on to impact investing
Lay of the land: the conservation philanthropists saving ecosystems across the globe
Featured In Issue:
CampdenFO issue 26

Next generation takes philanthropy to the heart of family business
The nine trends of modern philanthropy
Social impact and collaboration: Selin Yigitbasi-Ducker starts up outside the family
FB Roundup: Sodexo, Henkel, Roche
Family business philanthropy in the age of the coronavirus