Eric Michael Hilton, retired vice chairman of Hilton Hotels Corporation, died of natural causes in his home in Las Vegas on 10 December 2016. He was 83.

Born in El Paso, Texas in 1933, Eric Hilton was raised by his mother, Mary Barron Hilton. During high school, he excelled as a left-handed pitcher and was offered a contract to play for a minor league baseball team in Bisbee-Douglas, Arizona.

Instead, Eric worked summers at the El Paso Hilton and, after two years at Texas Western, was accepted to the School of Hotel Administration, Cornell University. However, the day after he got his acceptance letter, he received his draft notice despite the Korean War winding down. He joined the Army and served as a radar specialist in the United States and Japan.

After being discharged, in 1956, he climbed the career ladder in his family’s business, from the bottom all the way to the C-suite.

He was also a valued member of the Hilton Foundation’s international jury which selects the recipient of the annual $2 million Conrad N. Hilton Humanitarian Prize.

A long-time resident of Las Vegas, Eric had an idea that created Three Square, a non-profit organisation that collects and distributes food to children and seniors in Southern Nevada.

Hilton received the American Vocational Association Award of Merit and has been honoured with the Alumni President’s Award and an honorary Doctor of Humane Letters degree from the University of Houston, where he has also been inducted into the Hospitality Industry Hall of Honour. He previously served on the board of Future Business Leaders of America-Phi Beta Lambda, and was a trustee for the Little League Foundation for more than 35 years.

In addition, he has been involved with many projects in Las Vegas, including the Smith Center, The Cleveland Clinic Lou Ruvo Center for Brain Health, Opportunity Village and the William F. Harrah College of Hotel Administration at UNLV. 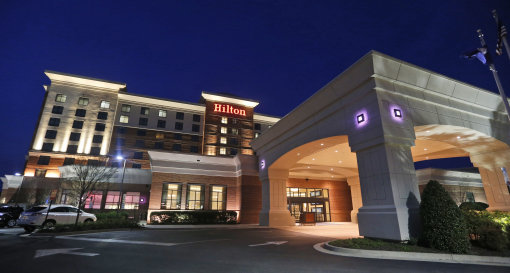