An Indonesian family conglomerate is putting its logistical muscle into getting relief supplies to disaster-struck Palu as the country reels from its fourth natural disaster in less than two months. An Indonesian family conglomerate is putting its logistical muscle into getting relief supplies into disaster-struck Palu as the country reels from its fourth natural disaster in less than two months.

The death toll in Indonesia's twin quake-tsunami disaster, centred on the island of Sulawesi, has climbed to 1,424 with time running out to rescue survivors a week after disaster struck.

To provide immediate relief, Surabaya-based Sekar Group, which owns the iconic Finna brand, is using its extensive food distribution network and local mining operators to deliver food, blankets, and tents to those affected.

The magnitude 7.5 earthquake and tsunami it spawned has destroyed 66,000 homes and displaced an estimated 60,000 people in Palu. It follows a series of earthquakes in Northern Lombok in August that led to 564 deaths.

A volcanic eruption on Sulawesi this week is the latest in a series of natural disasters to beset Indonesia.

In the week since they earthquake and tsunami hit, Sekar Group and its partners have donated $300,000 in supplies and services from rice and noodles, to cooking oil, water, and clothing.

It has 50 staff working fulltime on the relief effort, including 35 people enduring a 10-15 hour drive to deliver food to Palu’s 350,000 inhabitants. 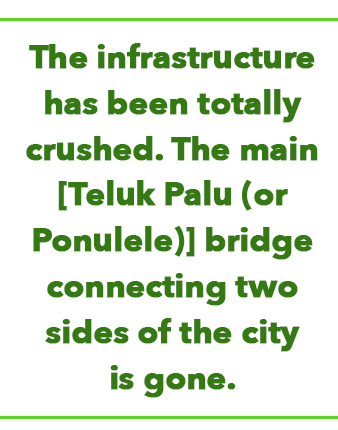 Second-generation executive Ryan Fong Jaya is helping coordinate the group’s relief response from Jakarta as access to tsunami-lashed Palu is being severely restricted by the local governor and Indonesian military.

“We have been using our network in south-east Sulawesi as our home depot where we stock up the supplies from the charitable contributions from our group and third-party partners. We then send trucks up to central Sulawesi to disperse the food,” says Fong Jaya.

Palu’s local airport is closed to all put a few private and military flights and parts of the city are on lockdown to limit looting and robbery that occurred in the immediate aftermath of the disaster.

“The infrastructure has been totally crushed. The main [Teluk Palu (or Ponulele)] bridge connecting two sides of the city is gone. Along the coast there used to be a mosque and several 4-star hotels that are destroyed and a lot of houses are gone as well. It is a tragic situation,” says Fong Jaya.

The Sekar Group is appealing to international families to help support the various groups providing support to the survivors in keeping with its culture of giving driven by its founder, Harry Susilo.

“We want to raise awareness in the international community that the way to contribute to this effort is to assist with the aftermath. To help rebuild the city.

“This has always been part of our [Sekar Group’s] culture. That’s why my uncle founded the Institute for Ethics in a Global Economy at Boston University … The most important thing he wants to pass on to the next generation are his ethical values, rather than financial capital,” he says.

A former fisherman, Susilo started the business in 1966 aged 25 after his father died of a stroke leaving eldest son Susilo to support his mother and 11 siblings. Today Sekar Group has more than 20,000 staff and indirectly employs more than 400,000 through co-ops Susilo helped establish.

It comes as the Global Family Office Report 2018 showed wealthy families globally gave an average of $5 million to philanthropic causes over the past 12 months. The most common causes are ‘education and health’, ‘economic and social impact’, and ‘the environment’.

Is your family able to provide support to those affected by the quake-tsunami in Palu? If so contact fb@campdenwealth.com, all expressions of interest will be passed straight to Ryan Fong Jaya.

Philanthropy versus impact investing in the world of the wealthy
Learnings from 300 years of giving back with Rennie Hoare
FB Roundup: AP Moller Holding, Selfridges, The Giving Pledge
Philanthropy—the ties that bind a family together
The Russell Investments ESG Manager Survey 2021: The red flag is raised on climate risk