The home of the family-run wine merchant and royal supplier Berry Bros & Rudd, at No 3 St James’s St in London, is shuttered for the foreseeable future. But Geordie Willis, creative director and eighth-generation family member, says business goes on—as it has for three centuries. The home of the family-run wine merchant and royal supplier Berry Bros & Rudd, at No 3 St James’s St in London, is shuttered for the foreseeable future. But Geordie Willis, creative director and eighth-generation family member, says business goes on—as it has for three centuries.

When I first started working at Berry Bros & Rudd, some 20 years ago, I was entrusted with the task of putting up the shutters each evening, and removing them again first thing in the morning. This signified the end and start of the working day or, at least, the hours that we expected to welcome visitors. It wasn’t long after I started that this daily ritual sadly came to an end—our events business had started to build steam and, understandably, our guests were keen to catch the occasional glimpse of the outside world.

There are mixed feelings for me seeing those same shutters back in place once again; one part nostalgia, the other a sad reminder of what has been the most unusual of years. It has been almost a decade since the shutters last went up, during the civil unrest of the 2011 London riots, and perhaps for me, they have sadly become more associated with trying times rather than the halcyon days of my early employment. 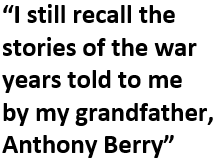 Of course, this isn’t the first time that our company has had to weather the storm. I still recall the stories of the war years told to me by my grandfather, Anthony Berry. During the Second World War, our cellars (at the time under Bury St) were left largely intact when the building above was gutted, amazingly leaving the majority of bottles unscathed. Not long after a bomb blasted No 3, pushing the front in by 2cm (a possible reason for the undulating floorboards that are plain to see for any visitor today). In September 1940, incendiaries destroyed the roof and top floor, and badly damaged the remainder of the upper part of the building.

For the next four years the business was managed with the help of a greatly reduced staff. It cannot have been much fun. Rationing, regulations, the need to disappoint customers, and all sorts of other shortages and privations, though bearable taken one at a time, added up to misery in total: the only alleviation was in reflecting that nothing goes on forever.

And so we find ourselves now, in the midst of a very different type of crisis. Our experience, however, tells us that we can make it through these trying times as well. We are lucky to work with an extraordinary team and to have customers who understand the challenges that businesses are faced with during these times. I have been humbled by the messages of support and the displays of solidarity.

We are very much looking forward to the day when the shutters can come down again and life can return to No 3 St James’s St. In the meantime, we will hold strong and remind ourselves that nothing goes on forever.

This article was originally published on Berry Bros & Rudd’s blog.

Geordie Willis is the creative director at the fine wine and spirits merchants Berry Bros & Rudd in St James’s St, Pall Mall. Founded in 1698, it is the UK’s oldest family-run wine merchant and supplier of wines to the royal family. The eighth-gen member brought his experience in publishing and design to the role of the family business’s multimedia marketing. He worked in Asia and was tenured at Berry Bros & Rudd’s office in Hong Kong.