The next generation taking charge of family wealth are seizing more opportunities in the world’s $418 billion venture capital space and powering the expansion by family offices into early investments, according to new research by Campden Wealth. The next generation taking charge of family wealth are seizing more opportunities in the world’s $418 billion venture capital space and powering the expansion by family offices into early investments, according to new research by Campden Wealth.

However, the best venture deals continued to be hard to access and most family offices relied on their existing network for deal flow. Recruiting and retaining expertise in venture capital remained a challenge for many family offices.

These findings and more were reported in A Roadmap to VC Success which launched today. The study is the first of four parts in a new benchmarking series called Family Offices Investing in Venture Capital—2021-2022 by Campden Wealth and SVB Capital, the global venture capital investment arm of SVB Financial Group.

A Roadmap to VC Success examines the venture investing maturity model within family offices, the investment structures and levels, and how venture deals are sourced. The report also includes lessons learned and recommendations from experienced family offices to those just starting out in the asset class.

A Roadmap to VC Success revealed that venture capital was the highest ranked area for next generation family members to be involved at 39%. VC took second place as the most common area last year at 33%, but the space has now proven more popular among next-gens than philanthropy at 37%, management/executive roles at 24% or ESG/impact investing, also at 24%.

“Venture is extremely complicated, and the universe is enormous,” a chief investment officer of a European single family office said in the Roadmap.

“Whatever approach a family is taking—i.e., funds or direct investments—they need people dedicated to the asset class. It makes sense to get next-gens—who might be passionate about the technologies and have good networking skills–involved early and developing the expertise to eventually lead the charge. But a lot depends on their personalities.” 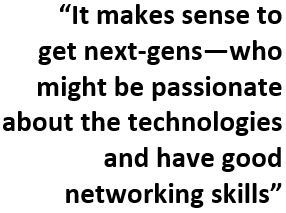 Investments leaned towards growth investments, representing 48% of the venture portfolio, followed by 28% in pre-seed and seed investments and 24% in Series A investments.

The Roadmap discovered 67% of family offices relied on their existing network of general partners of venture funds, founders and other family offices for deal flow. Only 1% used digital platforms.

The growing VC maturity in the global family office community was being matched by sophistication. A typical family office staff in 2021 consisted of 15 members, including two VC investment professionals. The inaugural 2020 study found the average family office staff included one venture capital specialist and families expected then that, within five years, one more would join their teams.

However, a chairman and chief investment officer of a private multi family office in Asia-Pacific told Campden Wealth it was difficult for family offices to build good quality in-house resources.

“Talent is scarce, shops are always opening up, salaries are high, and there is the huge carry as well,” he said.

“A $300k resource is heavy-duty for a smaller family office—especially one involved in a range of activities. This is why next-gens want to be involved in venture and why families are gravitating towards co-investing.”

North America Family Office Report 2022: Risk reduction, a focus on private equity and a move towards sustainable investing
Deal-chasing global family offices call for bespoke international professional services
Tell us about the developing and changing needs of your family office
Could a sea change be ahead in family business?
Tell Campden Wealth your family office’s venture capital insights in new survey