The power of three: Analysing the key findings of the Global Family Office Report The ‘rule of three’ or ‘power of three’ is a principle that suggests things which come in three are more satisfying and effective than in other combinations. The third annual Global Family Office Report is no exception, with three new areas exploring impact investing, cyber security, and human capital. So how did things shape up in 2016?

According to the report, produced by Campden Wealth and UBS, growing cost consciousness and a sharp drop in returns are the main concerns for family offices in 2016. The report, which primarily explores investments, structures, and purpose, also points to a growing interest in co-investing. Included in the report are three exciting new areas: impact investing, cyber security, and human capital.

This analysis of the report includes interviews with family office executives and service providers who have helped overturn a few commonly-held beliefs along the way. 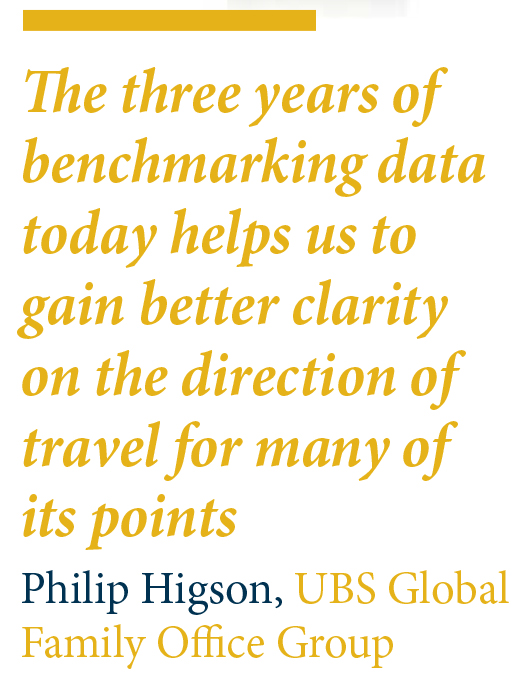 Based upon the surveys of 242 family offices, with an average assets under management of $759 million, and in-depth interviews with 25 principals, executives and advisers, the Global Family Office Report 2016 is widely considered the go-to-source for trends and insights in the sector.

The regional split for participants is as follows: North America (32% of respondents), Europe (40%), Asia-Pacific (19%), and emerging markets (9%). Where possible, the report looked at multi-year participants.

Philip Higson, vice chairman at UBS’s global family office group, says it is this three years of benchmarking data that helps the report break with tradition, adding that UBS has recently committed to a further three reports.

“If we go back to family office research pre the global study, you have great information, but it did not have the critical mass in terms of the population of people responding,” Higson says.

“The three years of benchmarking data today helps us to gain better clarity on the direction of travel for many of its points.”

While the purpose of this research snapshot is to look at some of the less obvious aspects of family office operations, the Global Family Office Report 2016 has a number of core findings.

Firstly, investment performance was weak, with returns at the lowest for three years. After returning 8.5% in 2013 and 6.1% in 2014, the composite global portfolio of family offices returned a disappointing 0.3% in 2015.

Secondly, there are significant regional differences in risk taking. There has been an overall increase in the percentage of family offices that are pursuing a growth strategy from 29% to 36%. However, strategic asset allocations reveal a high degree of regional variation. The most optimism can be seen in the US, where offices are shifting to growth allocations, while emerging market participants are much less stressed than in 2015.

Europe is the standout negative, with increased ‘preservation’ allocations and a cut in ‘growth’ allocations.

Stuart Rutherford, director of research at Campden Wealth, comments on the findings: “The historic strength of the asset class continues to drive the popularity of private equity. But the structure of private equity further explains its appeal to family offices, since it allows investors to really get to grips with specific industries, operations, and business models.”

With the key findings out of the way, what follows in this research snapshot is a look into the less well-document areas of family office operations, including human capital, impact investing, and a forward-looking piece exploring what the future might hold for family offices. There is also a ‘behind the scenes’ interview with the research team, looking at the trials and tribulations of producing a report on this scale.