Families have accelerated their wealth transfers to their next generation before a possible victory by Democrat challenger Joe Biden in the US presidential election. Families have accelerated their wealth transfers to their next generation before a possible victory by Democrat challenger Joe Biden in the US presidential election.

However, families should only consider how much and how to give away funds as part of their longer term multigenerational goals and if they could afford it, warned TwinFocus, a Boston and London based multi family office.

Estate planners and tax advisers in the United States have reported a marked increase in families looking to create trusts and prepare transfers of money and assets to make the most of President Donald Trump’s favourable tax and gift plans.

Biden has announced several proposals to raise taxes on high-income people and businesses. His aim of returning estate tax to its 2009 threshold would mean increasing the estate tax rate from 40% to 45% and lowering the exemption amounts from $11.58 million for estate and gift taxes in 2020 to $3.5 million for the estate tax and $1 million for the gift tax. How rapidly and vigorously a Biden administration would implement his proposals remained unclear. Nevertheless, the Democratic nominee continued to lead in national polls while the incumbent Republican president was trailing in swing states in the run-up to the election on 3 November.

The possibility of President Joe Biden in the wake of the coronavirus pandemic appeared to have sharpened minds on formalising family succession planning, traditionally declared by families as being of the utmost importance, but in practice a lower priority.

In 2016, Campden Wealth reported nearly 70% of family offices were expecting a generational transition to occur within the next 10 to 15 years. In 2019, Campden Wealth found 54% of families had a succession plan in place, up from 43% the previous year. More than a third (38%) of those plans were adopted within the last five years and 8% within the last year. However, another third (33%) of families surveyed were either still without plans, unaware of any plans that may have existed, or were still drafting their plans.

The biggest obstacles next gens faced during succession planning related to the discomfort families felt when discussing the sensitive topic (33%) and the main wealth holder being unwilling to relinquish control (22%). This was according to The Next Generation of Global Enterprising Families Shaping Tomorrow, Today 2020 report by Campden Research, in partnership with the Royal Bank of Canada.

CampdenFBasked brothers Paul (below right) and Wes (below left) Karger, of TwinFocus, if the Biden “Blue Wave” really was breaking over those discomforts and fast-forwarding family succession plans after years of sluggish progress.

Are you seeing an increase in families transferring their wealth to the next generation on the assumption Joe Biden will win the election and introduce steeper taxes on large gifts and inheritances to family members?

We have undoubtedly seen greater interest in exploring wealth transfer opportunities to next gen, as well as other family members and friends. A “Blue Wave” in the November election will almost certainly roll back the lifetime gift exemption that has doubled to $23.16 million (for a married couple) under President Trump, as well as impact a series of other tax regime changes. That has certainly driven a lot of activity around gift and estate planning, but no one should be automatically transferring wealth, through trusts or otherwise, unless it is part of their longer term multigenerational goals and their balance sheets can support such wealth transfer. Rather, wealthy families and their advisers need to be asking the right questions and put a plan in place that will allow them to make prudent moves no matter the outcome of the election.

How will Biden’s plans really affect families of wealth—are families right to be concerned?

The biggest impact the potential of a Biden administration has had so far is that it has accelerated conversations about wealth transfer. Many of the conversations families are having right now would have happened sooner or later—but perhaps over the next 20 years. Now, that timeline has collapsed as a result of the potential for a dramatic reduction in the lifetime gift exclusion from current levels by as early as the beginning of 2021.

For the exceptionally wealthy looking to take full advantage of the current lifetime gift exemption, their current concerns should revolve around how much to gift, how to gift it, and who should gift it. There is a myriad of factors to consider such as a potential beneficiary’s age, instilling the responsibilities of wealth upon the next generation, selection of fiduciaries, asset protection benefits, and the size of the family balance sheet. Our family office teams work with each client to dial in specific programs to ensure success across generations. 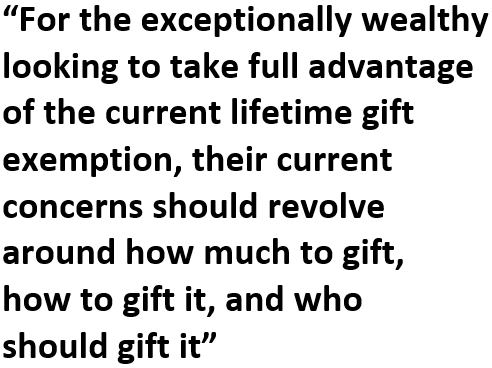 A couple with decades left to live and fairly robust spending needs may not want to gift the entire $23 million if it will impact their core asset base, lifestyle, and potentially jeopardise their financial stability over the long term. The same is true for families whose balance sheet is sub-$50 million—do they want to gift $23 million in the next few months? Those are very personal decisions for each family with a multitude of factors that weigh on them. As such, this decision for these types of families involves not only planning for the next generation, but tax planning for the patriarch and matriarch as well, to the extent this is possible.

How are families planning their estates now?

After deciding how much to give away, the second concern facing families right now is how to give it away, which also requires a lot of thought and planning. This is also highly subjective in terms of family dynamics. For example, TwinFocus is advising clients on estate planning vehicles that have an “escape hatch” in the event a “Blue Wave” does materialise, but they are not fully comfortable irrevocably gifting away large sums of money at this time, or perhaps the efficacy of planning and investment decisions create too much wealth for children over the next few decades.

One of those vehicles is a Spousal Lifetime Access Trust (SLAT), which allows the assets and future appreciation of these assets to escape estate tax, but allows the donor’s spouse to be a named beneficiary in the event those assets are needed by the matriarch and patriarch. Another option is to essentially loan a significant sum to heirs via a trust while contemplating extinguishing the loan in the event of a “Blue Wave”. While this requires some additional planning, this will ensure that the gift can be made very quickly and efficiently with the stroke of a pen by year-end.

Most estate planning attorneys are counseling their clients not to initiate new planning initiatives after 1 December due to what they believe will be a planning frenzy. If that option does not need to be exercised, the loan still allows the family to execute on a common “freeze” strategy for transferring wealth in this low interest rate environment, as in the heirs invest the money, keep the future appreciation gift and estate tax free, and then pay back the principal and minimal statutory interest). While there are a host of other estate planning strategies with built-in safety valves, these are the more “meat and potatoes” strategies being deployed. 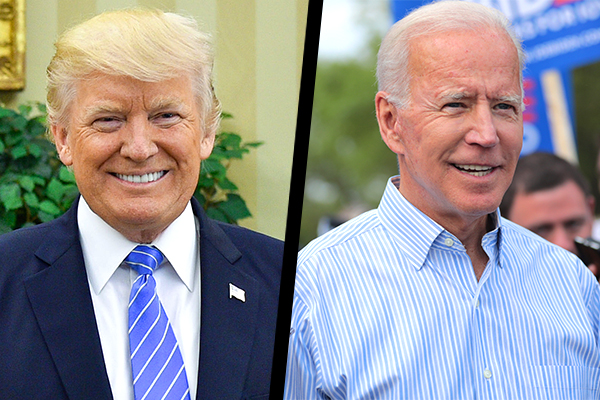 What is TwinFocus’ advice to families looking to fast-forward their wealth transfers?

There’s no one blanket strategy, so the biggest advice is to plan—and do so immediately—so you can start considering vehicles and strategies like the ones described. Most ultra-wealthy families are eager to ensure they take full advantage of the current exemption, and for these families, there is no time to waste. Estate planning attorneys are already working around the clock and a “Blue Wave” will make it even more difficult to call on them before a new congress and administration takes office in January.

Related Content:
When should next-gens learn about family wealth and responsibility?
US presidential election: Amundi on how it will impact US economy and financial markets