The age of quantum computing has dawned and tech giants and start-ups are racing to make the next generation of supercomputers applicable to our daily lives. Alison Ebbage reports on what it means for family businesses and investors Quantum computing could turn the technology world on its head. By harnessing properties beyond the grasp of traditional Newtonian physics, the potential is to transform the way that computers look at data and the speed at which they can process and analyse it.

The computers we are familiar with store information in zero and one bits. A quantum computer uses zero and one bits as well as the subatomic particles both in between and simultaneously to perform operations quicker
and with greater energy efficiency. At least, that’s the theory.

“Of course there are caveats, but that’s why these technologies are so interesting,” Jurczak says.

“This is now a time of exploration of use cases and of proofs of concept.”

Canadian firm D-Wave was the first to sell hardware with quantum effects and launched D-Wave Leap in late 2018 —a software tool that provides real-time access to their D-Wave 2000Q quantum computer. Microsoft has a Quantum Development Kit as part of its existing Microsoft Azure services, hailed as a full quantum stack of system, software and cloud. 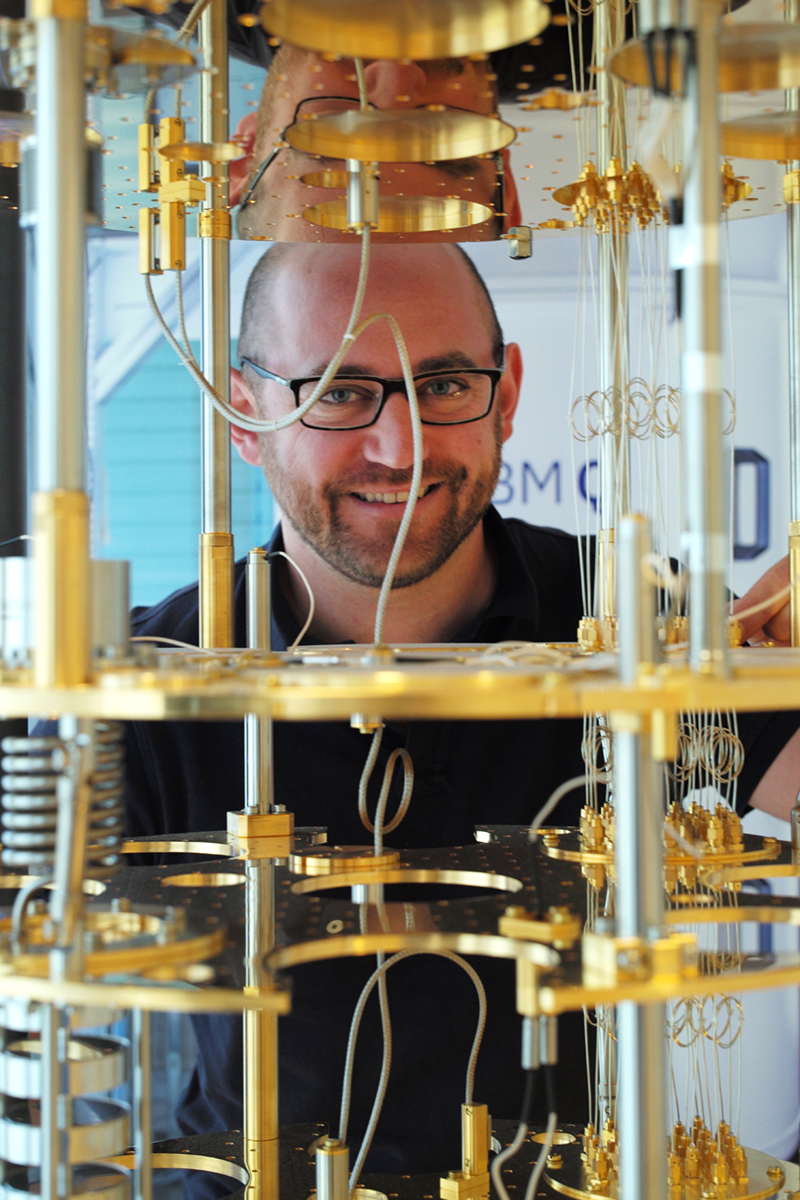 So far the technology is too new to be used by family businesses in a commercial context, and investment is in its infancy (see page 77). South Korea’s Samsung and Japan’s Nagase Group are the closest family-controlled businesses to this cutting edge technology. Samsung is one of the founding partners of IBM’s Q Network alongside Daimler and Accenture, while Nagase is a member.

The IBM Q Network is an industry-first initiative to build universal quantum computers for business and science. The company has a cross-disciplinary team developing scalable quantum systems, and potential applications for the technology.

Dr Stefan Woerner, global leader for quantum finance and optimisation and a research staff member in the quantum technologies at IBM, says his team launched the first iteration in 2016 with 16 qubits, available on open source and basically for people to play with.

“The commercial version, meanwhile, has 20 qubits and greater computational capacity based on the total volume available,” Woerner says.

“There are also several open source software tools, including Qiskit Aqua, which offers quantum algorithms upon which applications for experimenting and building chemistry, artificial intelligence (AI) optimisation and finance applications using a real quantum computer. This is particularly important for engaging with clients to work out what can and cannot be done and where the best case uses are within their enterprise.” 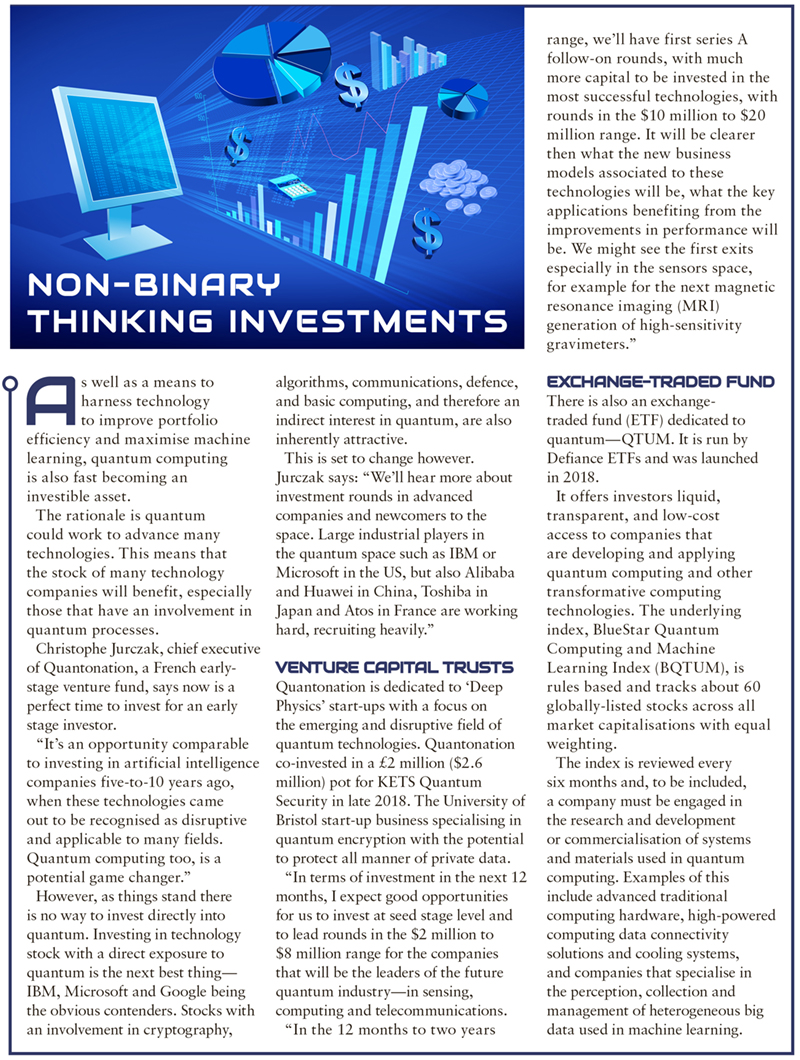 But just because quantum can, in theory, do something does not mean it should automatically be used and progress is at an early stage.

Zao Wu, analyst at financial technology consultancy Celent, says quantum computing is no doubt capable of great things, but in its current iteration is still apt to get things wrong.

“In technologynical terms this is known as disintegration—basically that its computing power is still limited, so that limits things in terms of reliability and stability.”

Nevertheless the potential for quantum computing to make a real difference within a range of industries, including financial services, is tangible. Potential uses are building better models of financial markets to improve fraud and risk analytics, strengthening cryptography by inventing new numbers, and improving operational efficiencies in messy and complicated areas, such as clearing and reconciliation of trades.

Machine learning is particularly set to benefit as quantum computers are able to analyse data to provide feedback much more efficiently than traditional computers. This significantly shortens the learning curve. 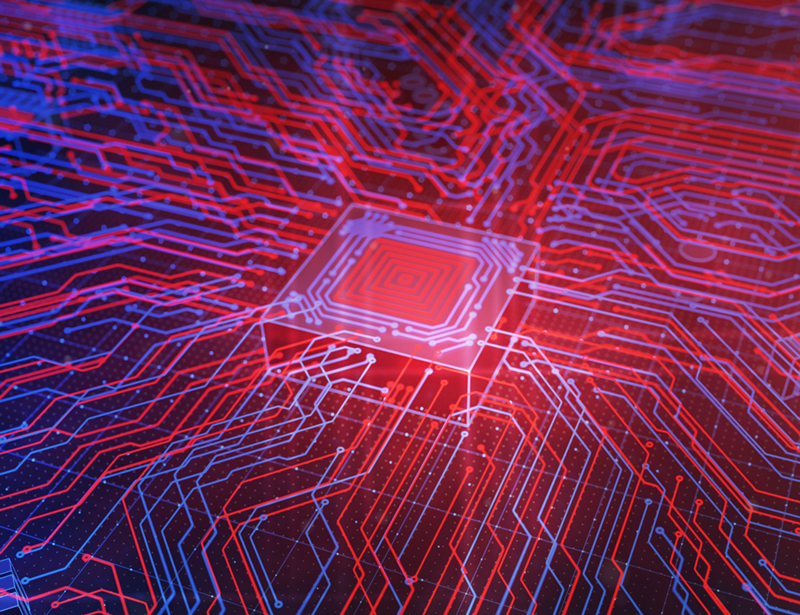 “Something we are working on is quantum algorithms that speed up the process because they need less data to come up with a risk assessment that is also accurate,” Woerner says.

“This means we can move away from overnight historical risk assessment to hourly and even real time using live data. It gives us the means to get away from best efforts based on historical data.”

Nomura in Japan is one bank actively looking at this. Specifically it is looking at artificial intelligence technologies to select an optimal mix of stocks to enhance the performance of clients’ investment portfolios. It will also be used to make predictions on future stock prices. The firm’s aim is to test the extent to which quantum computers increase the efficiency and accuracy of calculations.

Barclays and JPMorgan Chase, meanwhile, have both joined IBM’s Q Network for the same reason; to look at how quantum computing could speed up processing massive volumes of data. JPMorgan Chase is specifically looking to find out how quantum computing can be used when it comes to better trading strategies, improving client portfolios, and better-analysing financial risk. It has one quantum algorithm under development which looks specifically at speeding up derivative pricing.

This is a good example of how quantum computing can process and translate data. Derivatives typically need 10,000 simulations to price on a classical, conventional computer, but would need just 100 quantum operations on a quantum device.

Encryption is another area set to see changes once quantum computing becomes operational. Again the ability to crunch large amounts of data quickly means that the time taken to crack an encrypted code will reduce.

Significant work is being prepared to develop quantum encryption methods such as quantum key distribution, an ultra-secure communication method that requires a key to decipher a message.

“The problem is that current encryption methods are based on prime numbers and quantums can break this easily. What is needed is a change to a matrix of letters which is much harder for a quantum to break,” Woerner says.

“However, currently quantums are not big enough or accurate enough to break a binary encryption.”

Jurczak says a new standard for ‘quantum safe’ encryption should be adopted within two-to-three years.

“It will make the quantum computing threat much more tangible to the public, as well as ways to protect against it. And spectacular demonstrations of the building blocks of the future quantum internet will be made.” 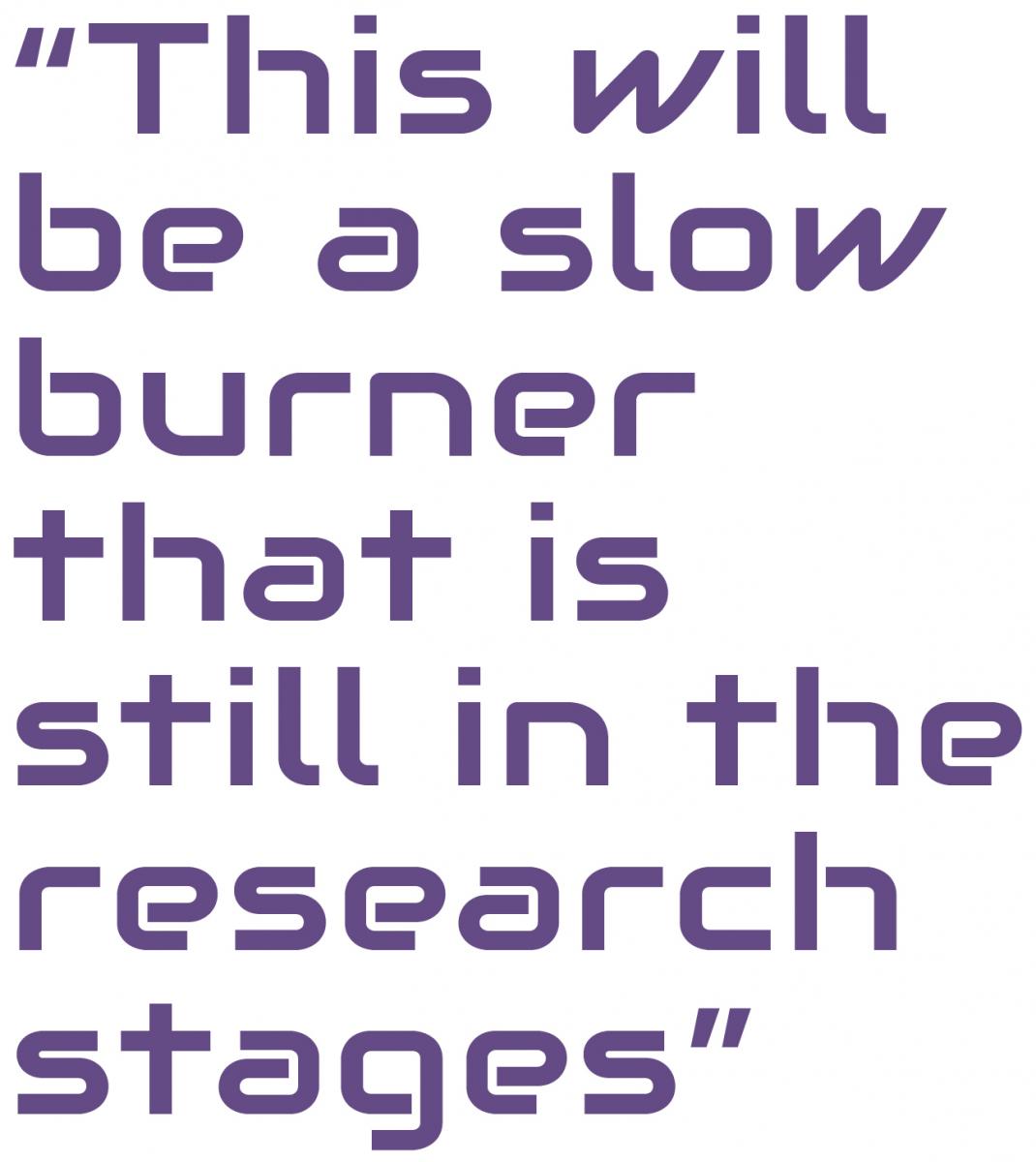 As things stand then quantum computing is very much in the development stage, offering just the promise of tangible greatness. The challenge is to develop something that is to-date neither powerful enough nor precise enough into something that is useable, reliable, accurate, and fast.

“The potential is massive, but in the short-term the limitations are such that it is hard to say if it has anything other than theoretical application,” Wu says.

“This will be a slow burner that is still in the research stages and, because it is fundamentally restricted by the physics, we need to expect a long wait, unless there is a fundamental breakthrough in the physics.”