Reflections and predictions: Jonathan Ruffer on investing in 2020

The year of 2019 was one when many of the six impossible things before breakfast remain unresolved—with the shining exception of Brexit, and the wider resolution of domestic politics. We can still feel the political earthquake which struck the UK last month—we cannot yet see the effect of it. Most political earthquakes, when they happen, are scarcely discerned, and even those which are perceived for what they are, do not easily reveal the new pathways created from the changed landscape. The year of 2019 was one when many of the six impossible things before breakfast remain unresolved—with the shining exception of Brexit, and the wider resolution of domestic politics. We can still feel the political earthquake which struck the UK last month—we cannot yet see the effect of it. Most political earthquakes, when they happen, are scarcely discerned, and even those which are perceived for what they are, do not easily reveal the new pathways created from the changed landscape.

Here are a few predictions. The UK will strike an adequate-to-disappointing deal with a disunited and diminished Europe, weakened by internal political strife, and in the context of a realpolitik which has created headwinds for global trade. It will be greeted with widespread indifference, and those who attempt to invoke the heat and thunder of the Brexit years will be greeted with the ennui meted out to those who reminisce overlong on the latest reunion of the Rolling Stones or ABBA.

During the course of the year, the markets recovered sharply from the last edge-of-precipice moment at the end of 2018; it has been a period when there was money to be made, as the Federal Reserve abandoned its decision to raise interest rates, and reversed into a series of cuts instead. Portfolios at Ruffer made reasonable money over the year, but were far from participating fully in the euphoria. This raises the question, ‘Is Ruffer LLP out of touch?’ It is a question which we wish to address, so, here goes…

The philosophy of Ruffer is built around the fact that clients love making money, but they hate losing it more than they like making it. Our philosophy translates into an attempt to combine two goals, which are basically incompatible. We aim, year on year, never to lose money, but, simultaneously, to put client assets at risk—genuine risk. This, of course, guarantees that their value will move up or down, often in volatile ways, and occasionally in violent ways. We have been doing this for 25 years, and the performance over that period has shown only one calendar year (2018) when we lost more than 3%—there have been a handful of occasions when this has happened over a rolling 12-month period. The conclusion I draw from this is that this ‘oil and water’ approach to investment—aiming at not losing money, but taking the risk that it might—is, in the long term, an effective approach. 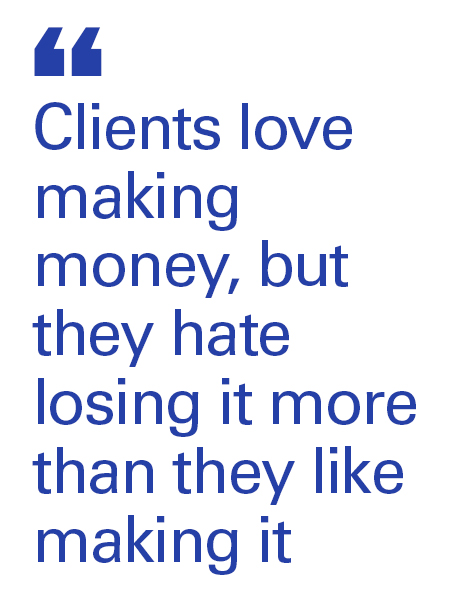 And yet, because we had a ‘down’ year in 2018, we have not done much better than break-even for three years. This must prompt a question, ‘Have Ruffer changed how they are doing the investments?’

For better or worse, the answer is no. Twice we have avoided a market which halved—in 2000-2003, and again in 2007-2008. (Indeed, in both of those periods we made gains of around 30% and 20% respectively.) But to avoid them, we needed to be correctly positioned, and on both occasions that positioning caused us to underperform beforehand. We were chided for not owning any TMT (techie) stocks in 1999, and we were ticked off for not owning any high-yielding (and dividend increasing) financial stocks in 2006/2007. The caution disadvantaged clients in the period before the denouement, and then—on much greater scale—it rewarded them.

From a vantage point of 2020, this may read like a Falstaff reciting histories of battles won in the far distant past—but in fact these are the only two market crises that there have been in the company’s lifetime, and it is fanciful to think that a long period of blue sky from 2010 has abolished the cyclicality of markets. Common sense is reinforced by an understanding of how this long period of market strength has come about, and we should emphasise that our nervousness is not simply a feeling that ‘it’s about time something will go wrong’. 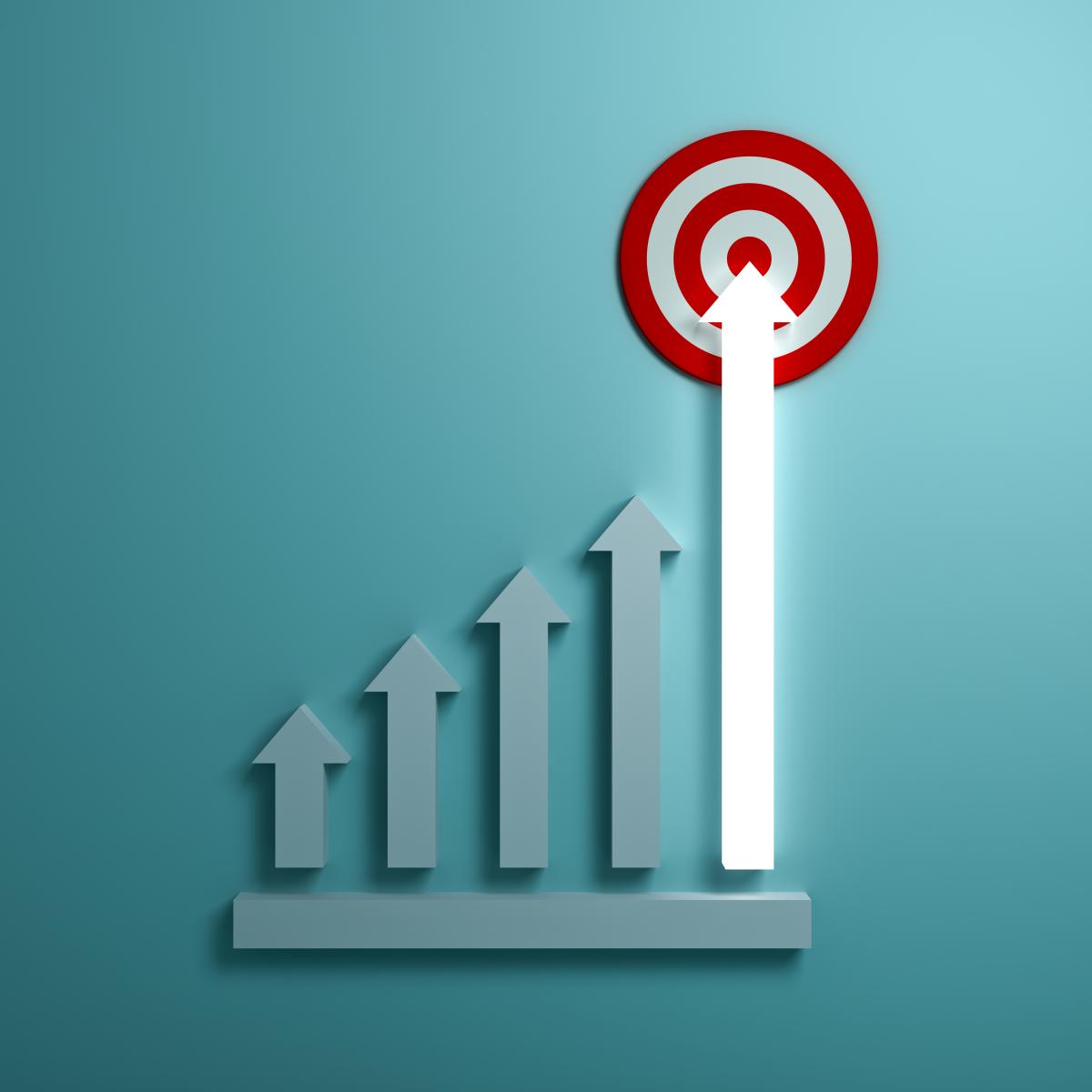 Nevertheless, it is the longevity of the wait which is unsettling. Let me set out our dispositions. The portfolios are full of risk, as they have always been, but we are careful to place that risk away from those areas which are caught up in a momentum trade (and which consequently need to be predominant in a portfolio which aims to keep up with the equity indices). The darker side of this decision is that it has tended to keep us out of the best, and the most exciting companies. We justify their absence because they are capable of very sharp falls in a dislocating market, even if the circumstances of the individual companies remain favourable. This can be seen in a phenomenon which in the 1970s was called the ‘nifty fifty’—the mania was built on the slogan of the boxing ring, ‘a good big’un will always beat a good littl’un’. In the event, the stocks proved, indeed, to be well chosen examples of best-in-breed America—only Xerox and Kodak disappointed at corporate level, but the change in valuations made them a dangerous place to site money. So today, we are innocent of them. That’s the first observation on the portfolio structure. 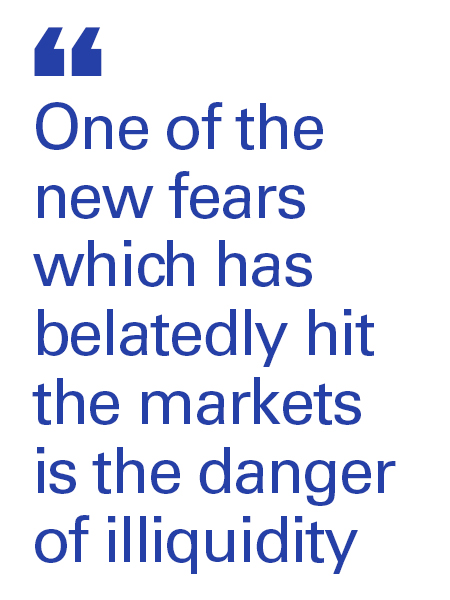 We are also largely innocent of companies which boringly, but with fair certainty, deliver stable returns. Unfortunately, ‘safe’ assets are particularly dangerous at the moment, bid up to high levels because all of us can see the dangers in the world, and they seem to be a good each-way bet—capture the upside while markets run forward, and rely on their safety when the markets fall back. This ignores the valuation risk, and they are arguably more dangerous to wealth preservation because their operational safety allows no hidden earnings surprises to offset the deflating valuation basis.

This means that the best companies are largely out of bounds, and the safe businesses are a bad balance of risk and reward. Nevertheless, these precautions will, of themselves, do no more than control the downside risk if and when trouble occurs in the markets. We do not want to look back over the period and observe that we had made less money for clients than was on offer in the ‘good’ times, and that we had merely matched that by losing less money than was likely in the next phase.

It is crucial that we have assets which will go up by more than the amounts by which our conventional assets might go down. Low interest rates mean that the usual diversifications have made all assets expensive, whether it is in fixed interest, the quoted sector (where you can see how expensive they are) or in the unquoted market, where you can’t see the danger, but you are caged into the investments, and cannot choose your moment to leave. One of the new fears which has belatedly hit the markets is the danger of illiquidity. It became apparent in the stable of funds run by Neil Woodford, who made a fundamental mistake in believing that the opaque nature of the true worth of unquoteds was to his advantage. But when too many of the clients wanted their money back, it not only destroyed his business, but also earned a rebuke from the Governor of the Bank of England that promises—implied or stated—that clients can get their money back when in fact they can’t is no less than a falsehood. It is a variation on one of the pillars which made the mortgage security market so dangerous in 2008—holders of ‘safe’ assets saw their holdings valued ‘marked to model’, not ‘to market’—in other words, the promoters made up the valuations. 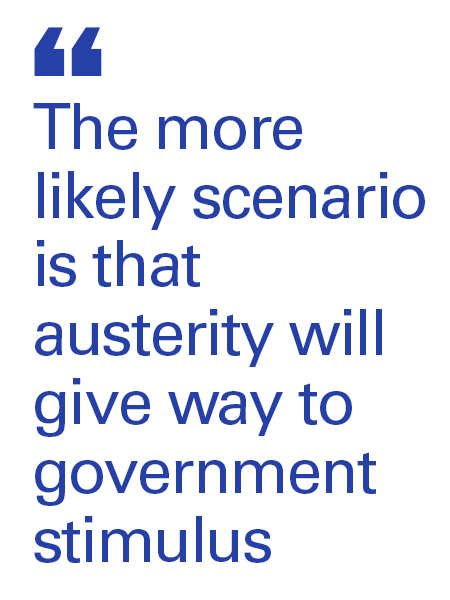 Our brief—to ourselves, but on the clients’ behalf—is therefore to avoid mousetraps, the places that are easier to get into than out of. I have laid out the constraints we face in the universe of investment: there is a mania for the idea that looks set to make money, there is false safety in ‘safe’ assets, and we believe we are facing the danger of markets which could seize up if those who bought long-term investments find that, along with all the others, they couldn’t convert their investments into cash when they changed their mind about long-term commitment. We have to buy investments which play the opposite to the crowds – and we have the advantage here that, although costly to hold, they go with the grain of long-term valuation. We look to hold inflation-protected bonds in a world beset with deflation but which could turn inflationary at short notice. We have instruments which gain value if corporate bonds yield more than they do at the moment compared with government bonds. We think volatility will accompany lower markets. We think that yield curves will steepen – long-dated bonds will have an increasingly higher yield than short-dated bonds – as risks become more apparent in the markets. All these, as I say, have a cost, but they are capable of the explosive performance needed to carry portfolios overall into profit.

This candid explanation of where we are does not leave much opportunity to articulate where things stand in the real world at the moment—Henry Maxey’s magnum opus, due out soon, will address this. He points to a medicated world of interest rates held at levels where holders of debt focus much more acutely on the day-to-day cost of their borrowings, and this far outweighs any thought about the ultimate need to repay the debt. Every aspect of all nations (China the foremost) are vulnerable if there is a big recession—and it is commonly understood that a dislocative market shock will, ipso facto, bring that about. He—and by extension all of us at Ruffer—think that the more likely scenario is that austerity will give way to government stimulus, which is the preferred route both politically, and increasingly intellectually. This is how we could face surprisingly high inflation, and its onset will make its appearance surprisingly quickly.

The articulation of that story—which is the intellectual basis for our investment stance, which (for the avoidance of doubt) is unchanged from this time last year—can await its publication. The purpose of this note is to put in context what we are doing, and why we are doing it. Inevitably, dealing with a deeply uncertain future, and the importance of the need to keep the money which we look after, safe—makes us ‘wee sleekit, cow’rin, tim’rous beasties’. But the central plank of what we’re doing—that there’s a dislocation ahead, speaking of wealth-destruction and illiquidity—well, our sureness of that makes us lions!

Ruffer LLP will be among the delegates attending the Campden Wealth Family Alternative Investment Meeting, in London on 25-26 February, and the Family Office and Investment Conference, in Geneva on 12-13 May.

How to position portfolios for tighter financial conditions
The importance of Europe in the captable of today’s and tomorrow’s companies
Diversified theatrical investment steps into the limelight with the Theatre Returns Fund
Jonathan Ruffer: Value, like beauty, is in the eye of the beholder
Impact investing in the world of family offices