Reasons why a family office should consider investing in platinum Platinum in Family Office portfolios may be the unexpected enhancer of diversification, sustainability and returns: Active promotion of jewellery and investment combine with platinum’s unique credentials — precious, industrial and green — to drive global demand growth in the face of constrained global supply.

Platinum is a distinctive precious investment asset, the premier jewellery metal and an in-demand industrial metal. Platinum has shown itself to be a successful investment over the long-term.

Platinum also possesses many of the critical investment attributes that family offices have revealed are important to them, according to a survey the World Platinum Investment Council recently commissioned with Campden Family Office (Figure 1). 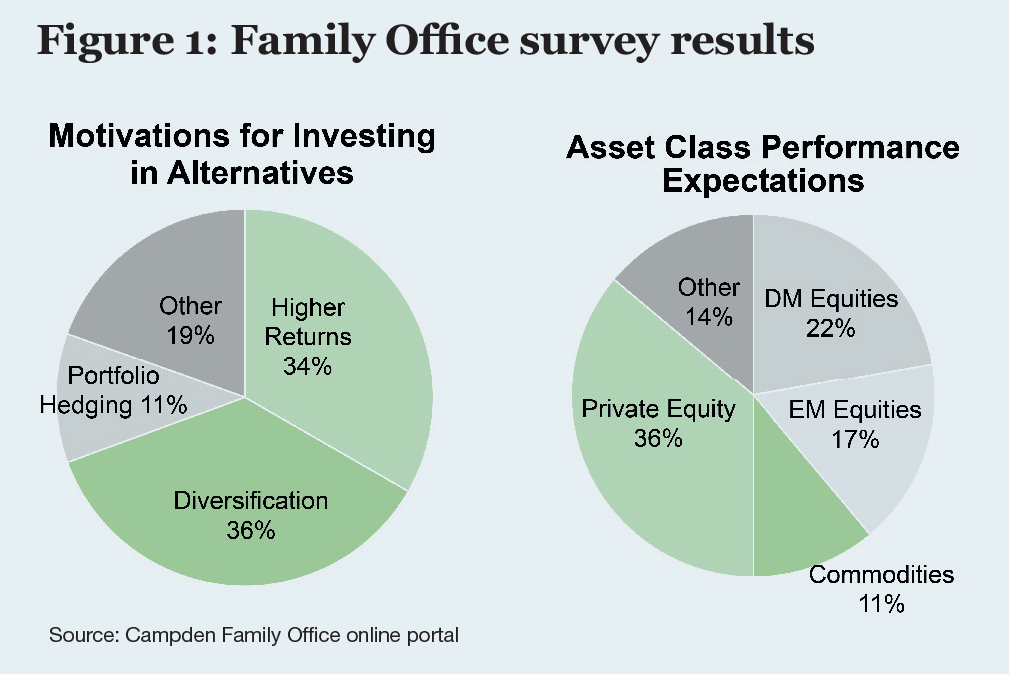 The survey canvassed the opinions of family offices through registered users of the Campden Family Office online portal. Among conclusions drawn were that platinum’s investment attributes often satisfy the prerequisites for family office portfolio consideration. The levels of due diligence and granular analysis necessary for successful investment in private equity, undertaken by many family offices, are well suited to investing in platinum. The survey also showed that where family offices adopt a thematic approach to their investments, platinum could be included if it was linked to such a theme. This includes, for example, benefiting from changes linked to megatrends such as addressing climate change, increased access to healthcare and provision of clean water.

Platinum’s strong past investment performance was driven by its diversity of application (Figure 4), diversity in geographic consumption, constrained supply and effective demand stimulation.

The largest single use for platinum is in automotive exhaust systems with a unique contribution to controlling noxious vehicle emissions. Demand growth in this segment is driven by increasingly tighter emissions legislation around the world.

Platinum has unquestionably established itself as the world’s premier jewellery metal, supported by successful promotion in centres of growing population such as China and India.

Platinum is used in a myriad of industrial applications ranging from chemical and glass production to increasing the storage capacity of computer hard disk drives and making temporary and permanent biomedical devices visible during keyhole surgery.

With its unique catalytic properties, platinum is an enabling metal helping the world meet many of the long-term challenges it faces, in particular, decarbonisation. 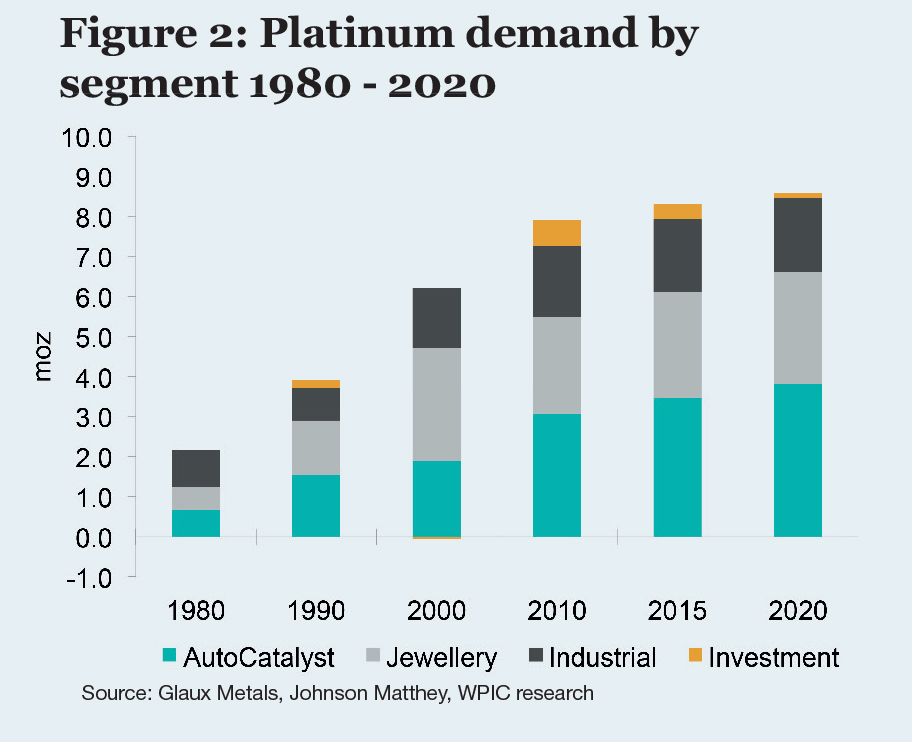 Here platinum plays a pivotal role in meeting the carbon reduction targets committed to by 193 countries at the Global Climate Change conference in Paris in 2015.  The world will only be able to successfully limit its carbon output with the inclusion, globally, of a meaningful portion of diesel and fuel cell electric vehicles, the latter containing more than twice the platinum per car of the former.

Platinum is also a liquid investment asset, efficiently traded on exchanges around the world and bought directly in its physical form as bars and coins. Platinum is currently owned by far fewer investors than those who could achieve enhanced returns by including it in their portfolios.

It is the continued diversity and adaptability of platinum that ensures it will be in demand for generations to come (Figure 2).

On the supply side of the fundamental equation (Figure 3), capital expenditure by mining producers in South Africa, which accounts for over 73% of global mine supply, continues to fall. This is likely, in conjunction with rising demand, to ensure that the global platinum market will remain in deficit until 2021 - an imbalance that should result in market prices more accurately reflecting fundamental value. Against the backdrop of such clearly supportive fundamentals it is reasonable to question why the price of platinum has been so poor in recent times.

Our own scrutiny shows that platinum was traded as if it were an in-surplus industrial commodity like copper, with high exposure to China infrastructure. In fact the reverse is true with platinum enjoying healthy deficits and mainly jewellery exposure in China. 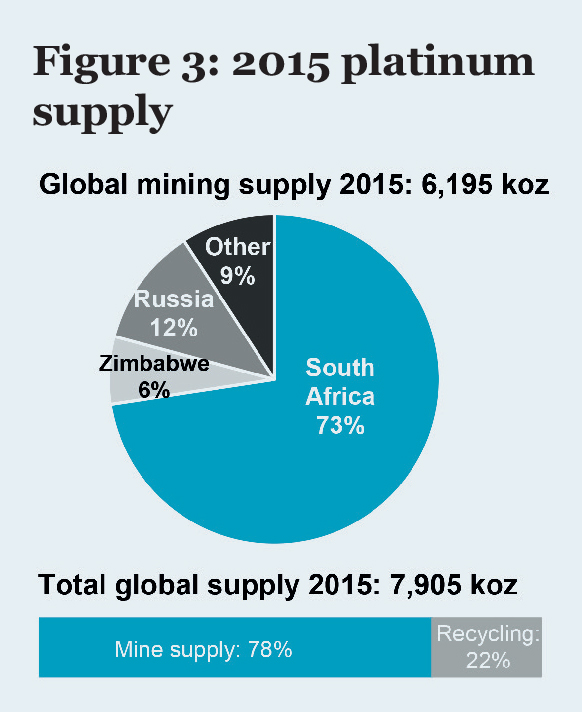 We believe the weakness in the platinum price that began in 2011 was largely driven by sales from investors’ vaulted holdings. The low prices that continued into 2016 were set by momentum and short-term traders, with a tightened correlation between the gold and platinum prices.

Platinum has traditionally traded at a healthy premium to gold. Indeed, there have only been four occasions during the last 40 years where, as is the case now, platinum has been priced at a discount to gold for a sustained period. In all previous cases, the price has markedly recovered in the following years.

Of course, the historically depressed price of platinum offers a relatively low-risk entry opportunity for family offices and other investors looking to buy into this investment asset. Indeed, it seems that sections of the market are already realising this opportunity.

Recently published data from independent research consultants SFA (Oxford) highlighted a surge in investment demand largely from the mature Japanese market at the end of 2015 and start of 2016, where retail investors bought heavily into physical platinum in the form of bars and coins.

Alongside the opportunity to buy at historically low prices, family offices investing in platinum will enjoy the portfolio benefits that come with platinum - something that is not widely realised. Platinum has low correlation to traditional assets and performs well during periods of economic recovery, while an allocation to platinum can improve the risk-adjusted returns of a portfolio, including when gold is present.

In summation, platinum is an enduring precious metal that is supported by both short and long-term demand drivers, fundamental deficits and investment characteristics that are likely to benefit many asset portfolios.

The World Platinum Investment Council is not authorised by the Financial Conduct Authority to give investment advice.