Third-generation steelmakers Radha Smelters have had their fair share of ups and downs, which is why educating the next generation, mixed with on-the-job experience, is so highly prized. Nicholas Moody reports India’s steel industry is not for the fainthearted. On the front line of global trade battles between some of the world’s largest economies, the recent spike in cheap steel imports from other Asian countries, alongside allegations of Chinese ‘dumping’, forced the price of steel in India to drop more than 10% between October and December last year. Meanwhile US exports have narrowed thanks to extra duties. Add in competition from the likes of domestic giants JSW Steel and Tata Steel, plus the daily price fluctuations for steel-making’s raw materials, and you have a cocktail of potential business headaches.

Considering all the competition, Suman Saraf is remarkably calm. Saraf is the managing director, and his brother Sunil the chairman, of Radha Smelters—the third-generation steelmaker set up by their father, Shri Radheshyam Ji Saraf in Hyderabad in 1966—best-known by its Radha TMT brand.

“It has been a long journey,” admits Suman. “There have been ups and downs.” 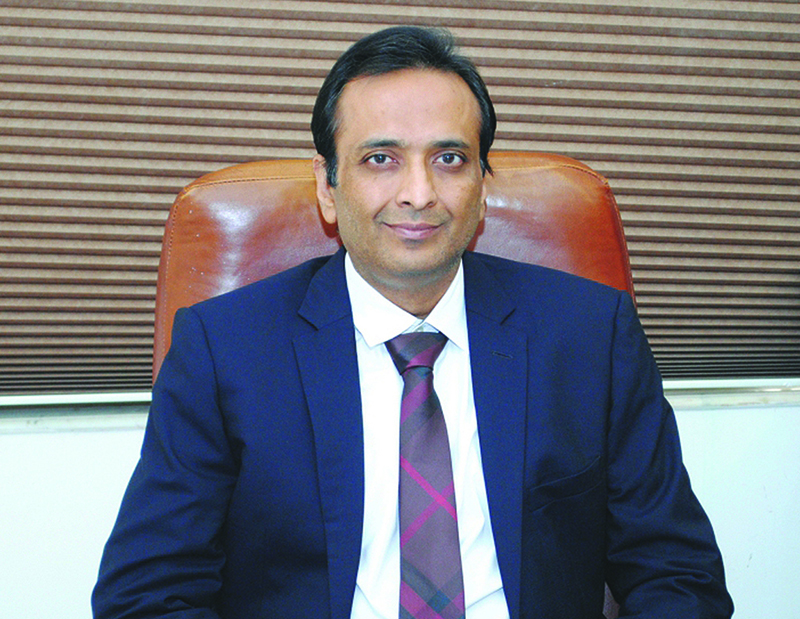 In 1996 the Saraf family went public with one of its companies based on Taiwanese technology.

“But we didn’t get the right people to run it, so in 1998 we sold that listed unit to one of the big steel conglomerates in Hyderabad and we regrouped the group into a much bigger focus with better technology in 2000 under the name Radha TMT,” Suman explains.

The next test came almost a decade later. From 2008 to 2015, 80% of the steel industry closed in Andhra Pradesh—the region formerly governed by Hyderabad.

“The market was very bad,” recalls Suman. “Cheap steel was being dumped from China, so it was a very tough period. But we survived it and came out stronger because we never over-leveraged our assets. We always believed in limited funding from the banks,” he says. 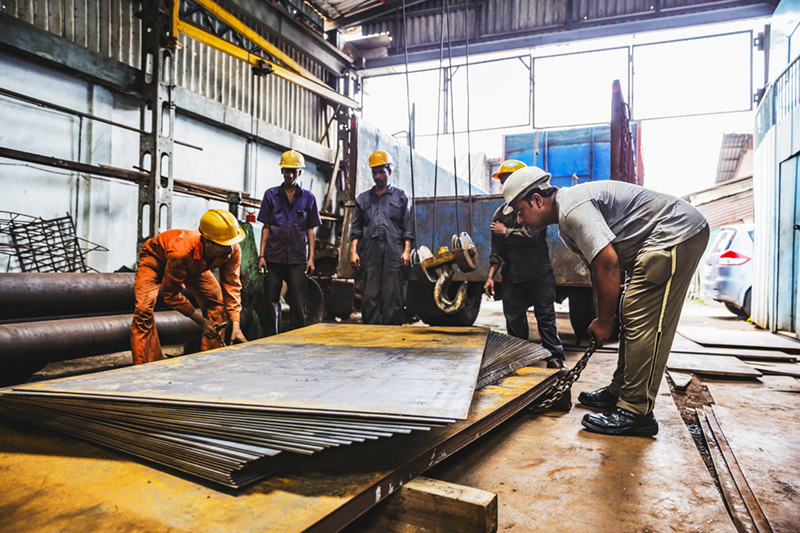 Today Radha TMT 550 is the brand name of their thermo-mechanically-treated (TMT) steel bars that use revolutionary German Thermex technology to produce high-quality primary steel. Their products get used in a wide range of construction projects from roads and dams, to high-rise buildings, and residential housing.

“Quality is the top priority,” says Suman. “Making profits is not important to me. Profits will flow if you provide a good product, that is the entire value system which has been inculcated from my father to me, and from me to my next generation.”

Despite the flood of cheap imports, there are reasons to be cheerful: “The market is booming,” enthuses Suman. “The latest government central budget has provided six lakh crores rupees ($87 billion) for infrastructure development. A slew of measures to boost domestic manufacturing, smart cities, higher expenditures on railways, and affordable housing will create a lot of demand for steel, so the future looks very bright.”

This demand has pushed annual revenues for Radha TMT to INR 550 crore ($80 million), which saw total revenues top out at INR 1,000 crore rupees ($145 million) when combined with the family’s other businesses that invest in real estate and construction “in a big way”. Their non-steel investments involve buying up non-performing assets from banks, typically factories, selling off the machinery, and keeping the land to capitalise on its increasing value.

The Saraf family may have diversified away from a sole reliance on steelmaking, but the operating business demands focused attention from Suman, Sunil, and the third generation who are either working in the business, or completing education. Suman’s day-to-day responsibilities involve building Radha TMT into a national brand, while Sunil is focused on purchasing the raw materials required for steelmaking. Sunil’s oldest son, Snehil (30), is now chief executive of Radha Smelters having graduated in 2009 from Purdue University in the US with a Bachelor of Science in Accounting with Finance and worked as an equity analyst at Batlivala and Karani Securities.

Sunil’s youngest son, Kushaal (26), completed his undergraduate degree at Hyderabad’s Amity University and his MBA from S P Jain School of Global Management. Meanwhile Suman’s son, Akshat (23), completed his undergraduate degree at Indiana University Bloomington. Since late 2017 he has overseen steel plant operations at Radha Smelters and is hoping to start his MBA in August 2019 having applied to nine US Ivy League colleges. 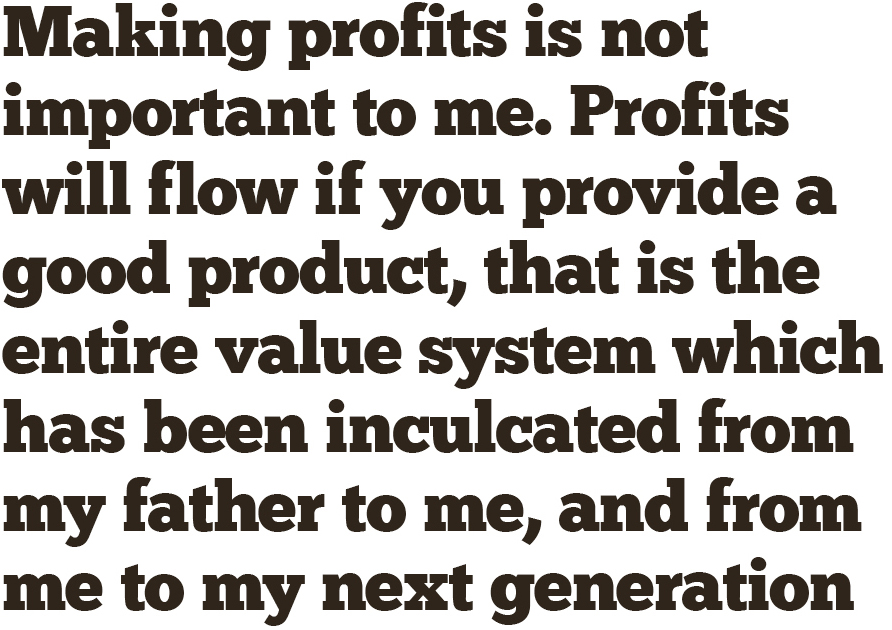 Sunil joined the business in 1985 and Suman in 1988, although with hindsight Suman regrets not pursuing his tertiary education further.

“My mother wanted me to go to the US and study, but I always wanted to get into the business of manufacturing steel. Immediately after graduating I started working and I did not go for my MBA. That was a mistake because things could have been different,” he says.

This experience has shaped his forthright views on next-generation succession into the business—he didn’t allow his nephews or son to enter the business, even restricting them physically entering the office, before they completed their education. 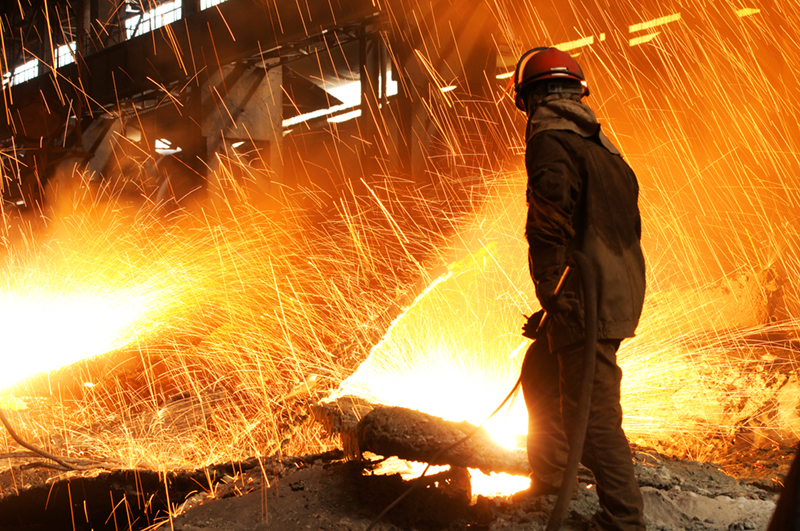 “Before I completed my undergraduate studies I would spend three to four hours each day at the office with my father, along with my studies. I do not think that was a very good thing. You should do one thing with total concentration. For the three boys, my two nephews and my son, I didn’t let them enter the office even during the holidays!”

This puts him at odds with a lot of Indian families. “It does not happen very much in Indian families where the mentality is, ‘We want our boys back to work’. We place a lot of importance on education,” he adds.

Despite the brothers’ emphasis on formal education, nothing can replace on-the-ground experience in India’s notoriously tricky steel business. 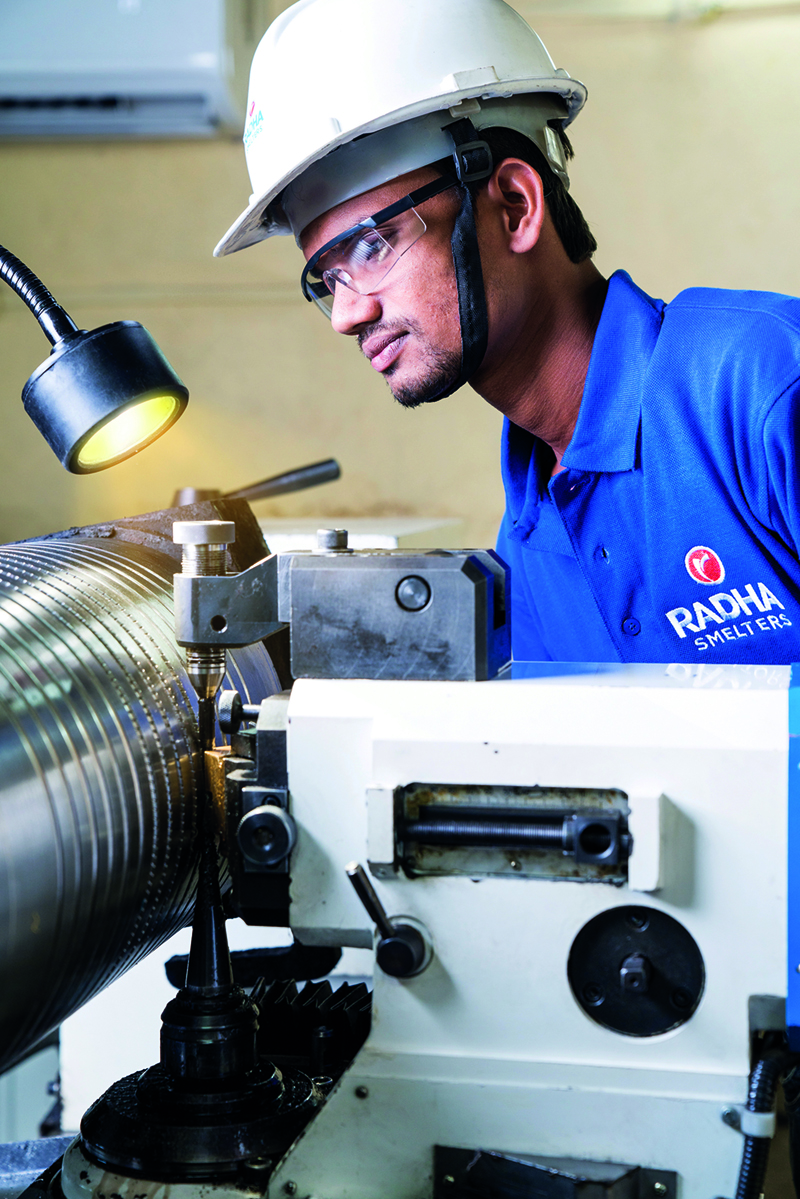 “Steel manufacturing is not an easy business in India. We have our own supplier ethical issues in our country, so we have to give a lot of personal attention to details. We are not a Tata Steel where they can move to having 100% non-family executives. We do have a professional set up, but major decisions have to be taken by us.”

Indeed Radha Smelters has professional managers overseeing the steel plants, and a professionalised office including a chief financial officer, president of sales, and other key functions, but purchase of raw material is taken care of by Sunil and Suman.

“Steel is a very fluctuating commodity. Like the stock market, the price of steel changes every hour. A non-family executive cannot catch the market pulse as well as we can because of our experience,” he says.

Yet the next generation is getting a shot at the responsibility. Snehil has now been trained over the past five years so he can helm the company for up to a month at a time on his own.

“We have been blessed that all the three children, in spite of their wealth, are very well-balanced and hardworking. They can work from 8am to 10pm. That is what is what we feel is a basic achievement that we have done. Our children are so focused on the business,” Suman adds.

“We have seen everything in life,” he says.

“We have made mistakes and we have learnt  from them.” 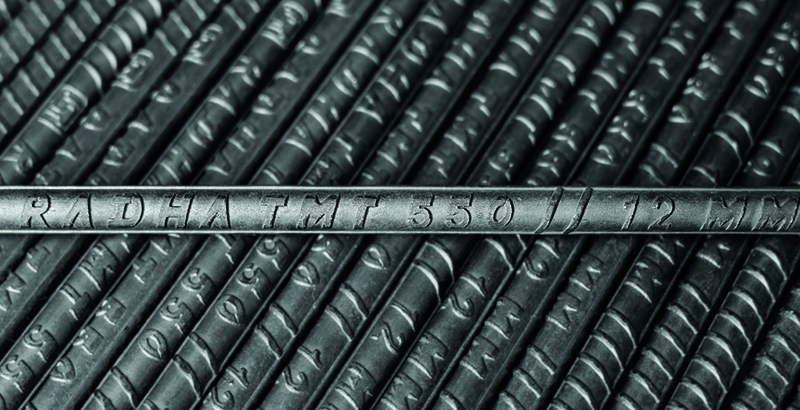 What advice would he give to other family businesses who are bringing their next generation into the business?

“The thinking of the next generation differs from family to family. We were fortunate that our children are very grounded, so we did not have much difficulty in moulding them,” he says.

But Suman is critical of the increasing unwillingness of the next generation of Indian families to start from the shop floor (see box out).

“There is a lot of new money so children are not as dedicated as they should be if they want to take the group forward. They don’t want to grow the business, they want to inherit a business,” he says.

He is concerned by what he sees in other families. “[These next generation] are wielding the power of the money to have the position, but without having good knowledge of the industry. If you have to be a master of an industry you have to start at the bottom. You cannot learn this at business school.”

Suman points to the example of Vijay Mallya, the multimillionaire former chairman of United Spirits and self-proclaimed “King of the Good Times”, who is facing extradition charges to India to face allegations of fraud.

Mallya inherited India’s United Breweries at the age of 28 when his father died and led it on an ambitious expansion strategy into a variety of sectors including aviation, real estate, and fertiliser. His empire has crumbled since Kingfisher Airlines’ collapse in 2012 with 17 Indian banks trying to collect INR 9,000 crore ($1.3 billion) in outstanding loans. 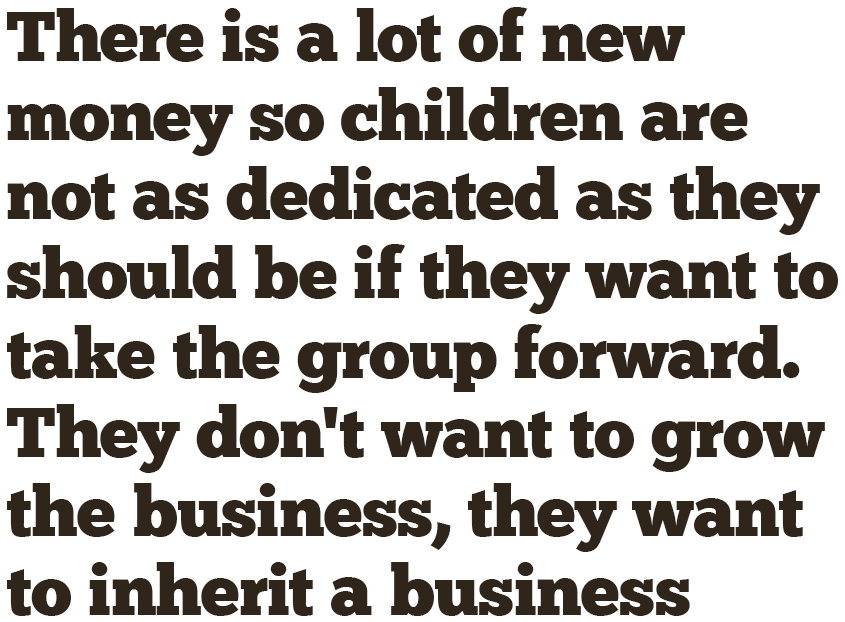 “There were a lot of profitable companies under [Mallya’s] belt. But the value systems were not there and he went into too much glamour, which is the case with most big Indian families these days,” Suman warns.

“[The next generation] want to do their own things, some are successful, some are not. We hear the success stories, but we do not hear the millions of unsuccessful ones. There may be millions of unsuccessful stories, but they hear one success story and the nextgeneration come to take that as the benchmark to say, ‘We can do that’ with starts-ups also. We can think of Uber, Amazon etc, but so many start-ups have failed, how many unsuccessful stories are there? So many brilliant minds have failed.”

Suman recounts how his nephew, Snehil, was adamant he wanted to spend INR 300 crore ($44 million) setting up a pelletisation power project 700km from Hyderabad.

“My brother told him, ‘We will set up a INR 3,000 crore plant, but only if you spend one year on the shop floor of the factory’. After spending one year in the factory he decided it was not as easy as it was in the books. There are no Mills & Boon stories in real life,” he adds.

How then is it working with your brother?

“We work from the same office and we get along very well. We have our own conflicts. They do happen when some decisions he supports, I do not—that is bound to happen. But 99% of the time we see that one plus one is equal to eleven, not two.”

The brothers have a succession plan in mind, but it is too early to engage in formal planning, he says.

“We still have four to five years to work on that, but we will start with advisory services on how to do the succession plan. We need professionals to guide us through the process. We have started thinking about it to reduce the conflict in the next generation,” he adds.

As our conversation draws to a close, what are the greatest challenges and opportunities he sees for family businesses in India?

“The main challenge for family businesses in India is if anyone has an inflated ego. That should be controlled. If that is controlled then there are no issues that a family business cannot face. One plus one plus one is not three, it is 111. It is very difficult to control today’s generation from conflicts, but we have always tried to tell them that you will grow only if you are united and keep your egos in check.”

How should we think about diversification within private equity?
FB Roundup: Gautam Adani, Todd Boehly, Guy Hands
Emanuele Preve on siblings, succession, and sector diversification
Investors need to look beyond the conventional for real returns
How much is Elon Musk’s right-hand man paid?