From Koch Industries to Advance Publications, Campden Research has compiled the first-ever list of the Top 10 wholly-owned US family businesses – a group we’ve dubbed ‘The 100% Club’ From Koch Industries to Advance Publications, Campden Research has compiled the first-ever list of the Top 10 wholly-owned US family businesses – a group we’ve dubbed ‘The 100% Club’. It’s a roll call of many well-known US family-controlled companies that are akin to arguably the ultimate family enterprise – successful, multi-billion dollar holdings still totally controlled by their family owners. Read through our mini-profiles on each of the Top 10 businesses, plus useful facts and figures on everything from revenues to regions of operation. What does it take to be part of the 100% Club? Read on to find out. 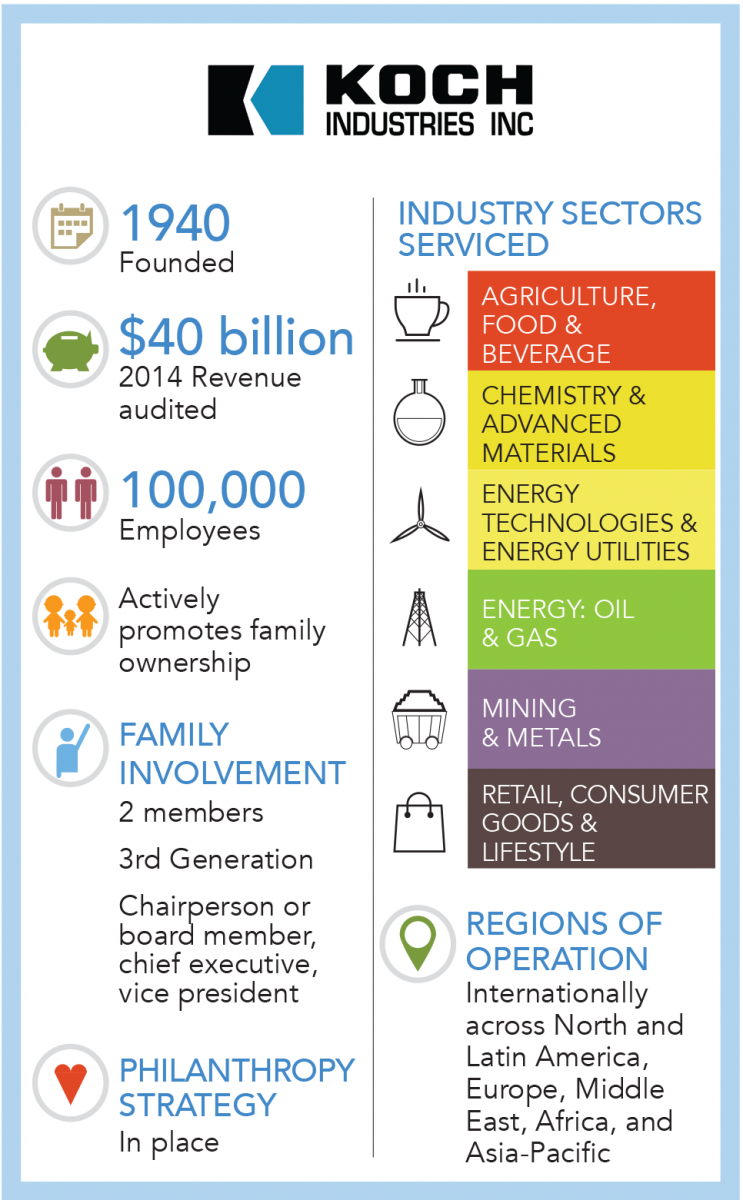 Koch Industries is the second-biggest family business globally. It was named after Fred Koch, who invented a better way of converting heavy oil into gasoline in 1927. Today the company operates in 60 countries and employs around 100,000 individuals. Through its various companies, it manufactures a wide variety of products, including transportation fuels, building and consumer products, electronic connectors, fertilisers and pollution control equipment. The company has prioritised growth, and has invested more than $70 billion in acquisitions and capital expenditure since 2003. It is run by third-generation members, Charles and David Koch. Charles Koch is chairman of the board and chief executive of Koch Industries, a position he has held since 1967.

One of the world’s leading food manufacturers, Mars, founded by Franklin Clarence Mars in 1911, operates in 73 countries. It has 72,000 employees, though more than a third of employees are based in the US. Committed to research and development of new products, the company has innovated across its large product range, which spans food and drink to chewing gum and pet foods. The acquisitions in 2014 of Procter & Gamble’s pet food business has been part of the story of its 2014 revenue growth to $33 billion. Mars is governed by a board of directors who are members of the Mars family, and who receive independent advice from four external board advisers. 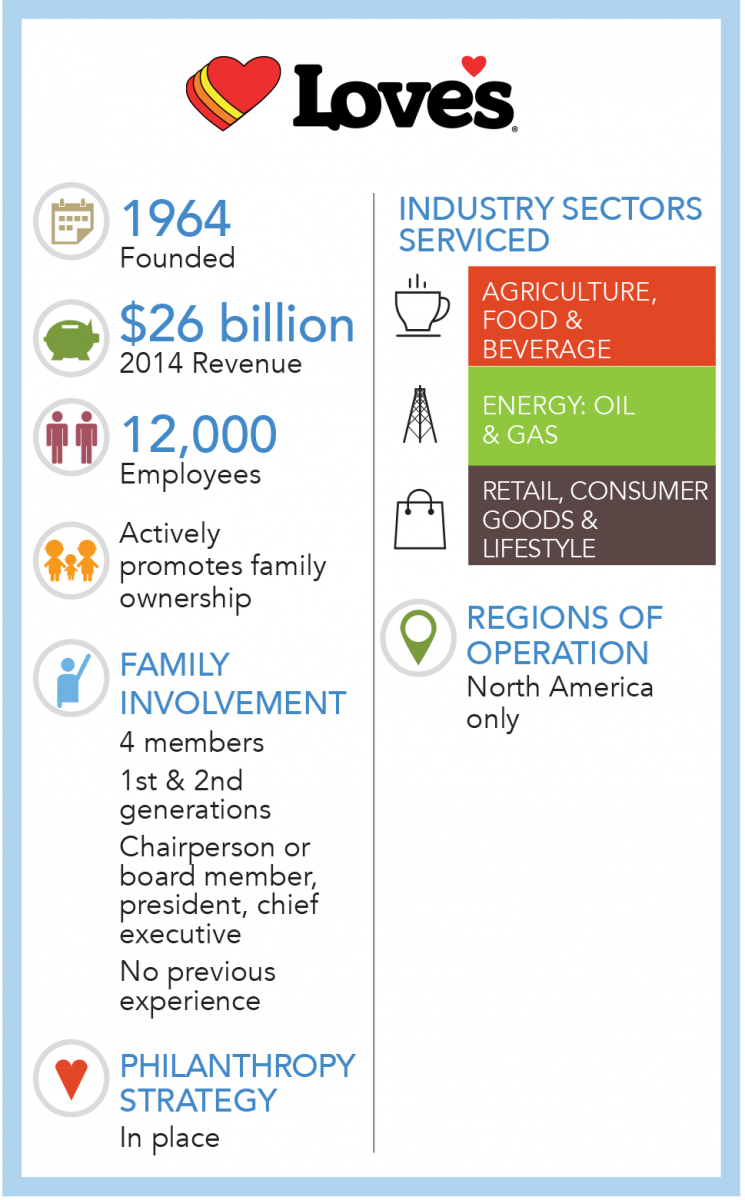 Love's Travel Stops & Country Stores has over 350 travel stops and convenience stores located in 40 states in the US. It is one of the few companies not to expand beyond the US border. Founded by Tom Love in 1964, the business employs 12,000 individuals, and is now run by second-generation brothers Frank Love (president) and Greg Love (chief executive). Keen to invest and give value back to customers, investments in IT during the early 2000s allowed Love’s to begin offering high-speed wireless internet access to customers who were on the road for several hours. 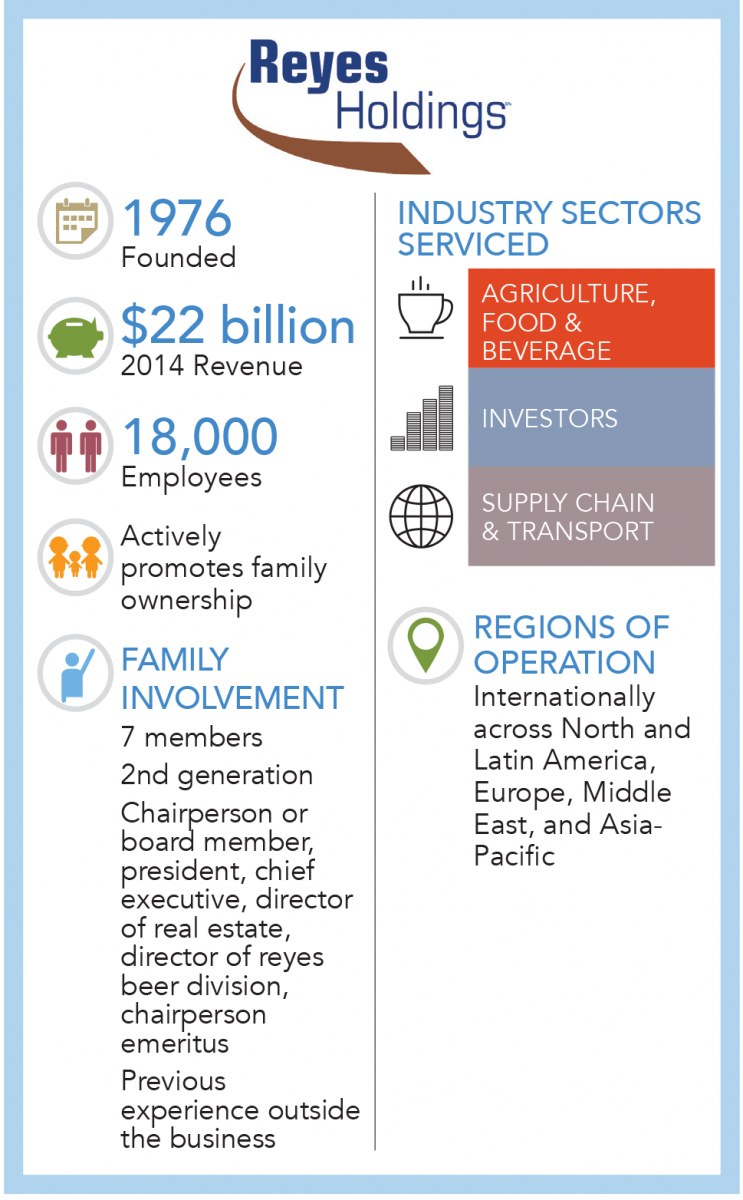 Reyes Holdings is the youngest family business in the top 10, founded in 1976. Owned by founding brothers J. Christopher and M. Jude Reyes, the business aligns with leading brewers and food service providers to deliver a wide variety of food and beverage items to retailers globally. It also has a real estate arm with 138 properties worldwide. Employing some 18,000 people and producing revenues of $22 billion in 2014, Reyes Holdings has made more than 130 acquisitions since 1976. One of its key factors for acquisitions is that the business must be privately-held, and ideally family-owned. It states, “We understand the importance and pride of owners whose names are on the door and the significance of retaining that culture with employees and its communities post-acquisition.” 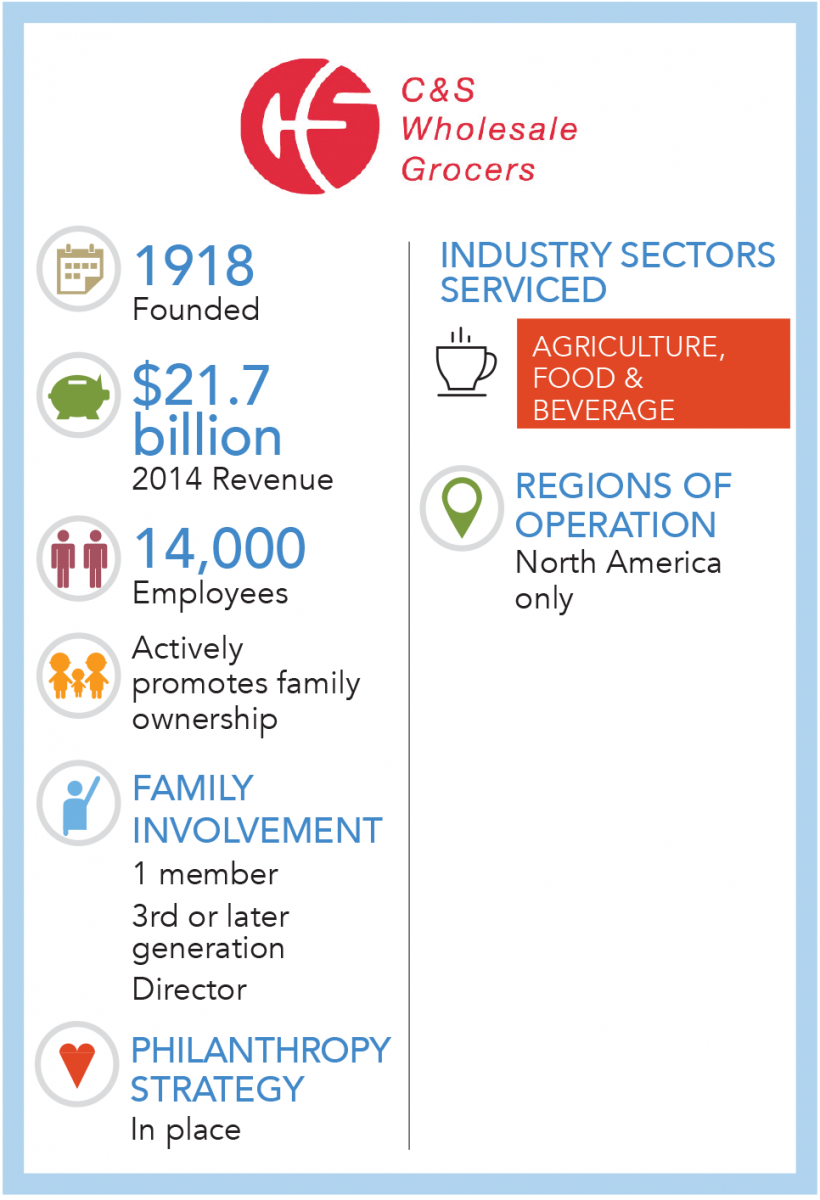 C&S Wholesale Grocers started out with a small warehouse that stocked 1,200 products in 1918. It is now owned solely by Richard B. Cohen, a third generation who grew up working for the business. Nowadays, C&S Wholesale Grocers engages in the wholesale supply of food and grocery products to independent supermarkets, chain stores, and institutions in the US. In 2008, the company engineered a corporate social responsibility strategic plan to “redefine” community commitment. The move is to become a more values-based company, engaging employees to take action on behalf of others, investing in local community groups, and leveraging its strategic non-profit partnerships to drive change nationally. With revenues of $21.7 billion, and 14,000 employees, the intention is to keep growing, evidenced by the purchase of Associated Wholesaler in September 2014. 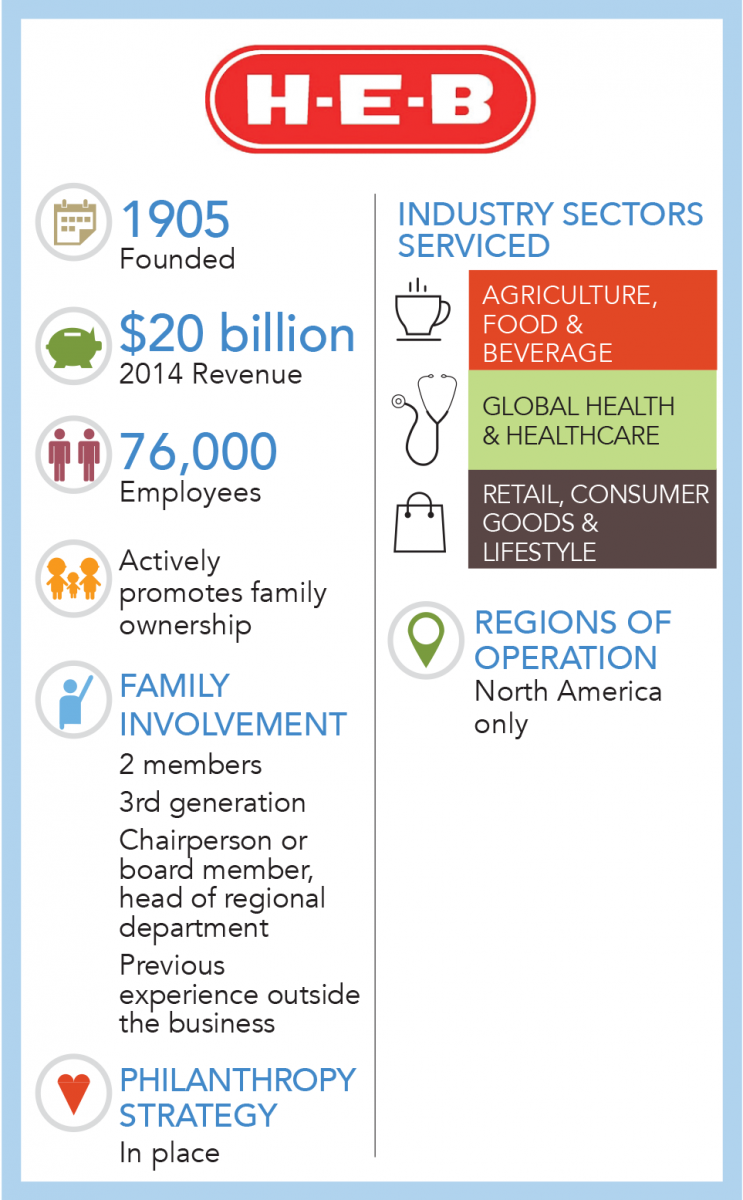 In 2015, HE Butt Grocery celebrated its 110th anniversary and the successful growth of a supermarket chain that is based in Texas and North Mexico. Currently numbering 369 stores, the company is known for its active promotion of the family brand. Current chief executive Charles Butt is the third generation of the Butt family, with two of his siblings and two nephews owning stakes in the company as well. With 76,000 employees, the company is still developing its product range, for instance, expanding its range of organic products, as well as increasing patent development, and headcount. This is key to the company’s environmental, social, and governance policies, where they build up lasting rapport with local growers.

Enterprise Holdings is the largest car rental service provider in the world measured by revenue, employees and fleet and is owned by the Taylor family. Now led by the second generation, the company has revenues of $16.4 billion in 2014 and 91,000 staff members. It attributes its success to a conservative and disciplined long-term approach to managing the business. In 2007, the business acquired the National Car Rental and Alamo Rent A Car brands and achieved an 8.5% growth rate in 2014. Philanthropically active, Enterprise Holdings’ foundation has given more than $200 million to non-profits, primarily its focus being health and human services. 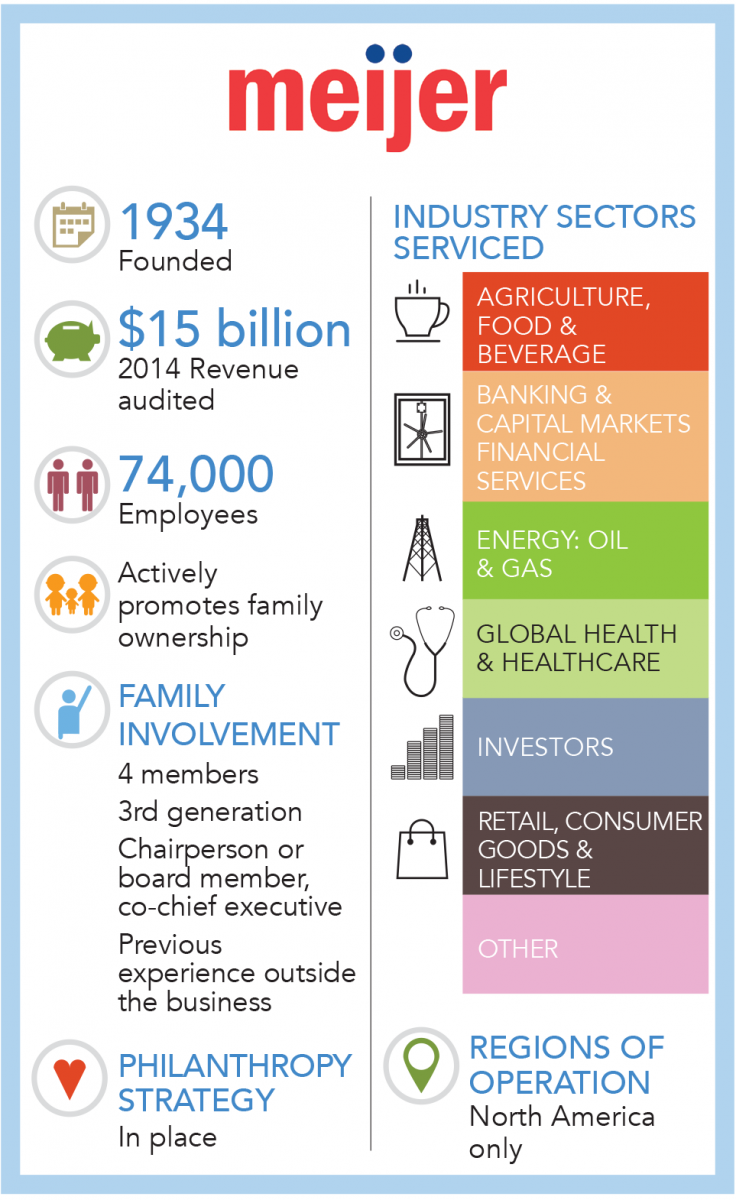 Meijer is a Michigan-based grocery chain owned and operated by the Meijer family. Starting as a ‘one stop’ grocery store, it is now a major player in the supermarket industry in the US across 5 states with turnover of $15 billion. Employing 74,000 people, brothers Hank and Doug are co-chairmen and Hank is also chief executive. Meijer is always looking to increase the states in which it operates, generating more market share and has been rapidly opening more stores over the last three years. In 2014, company revenue grew by 3%, and the company attributes some of its success to sourcing products locally. 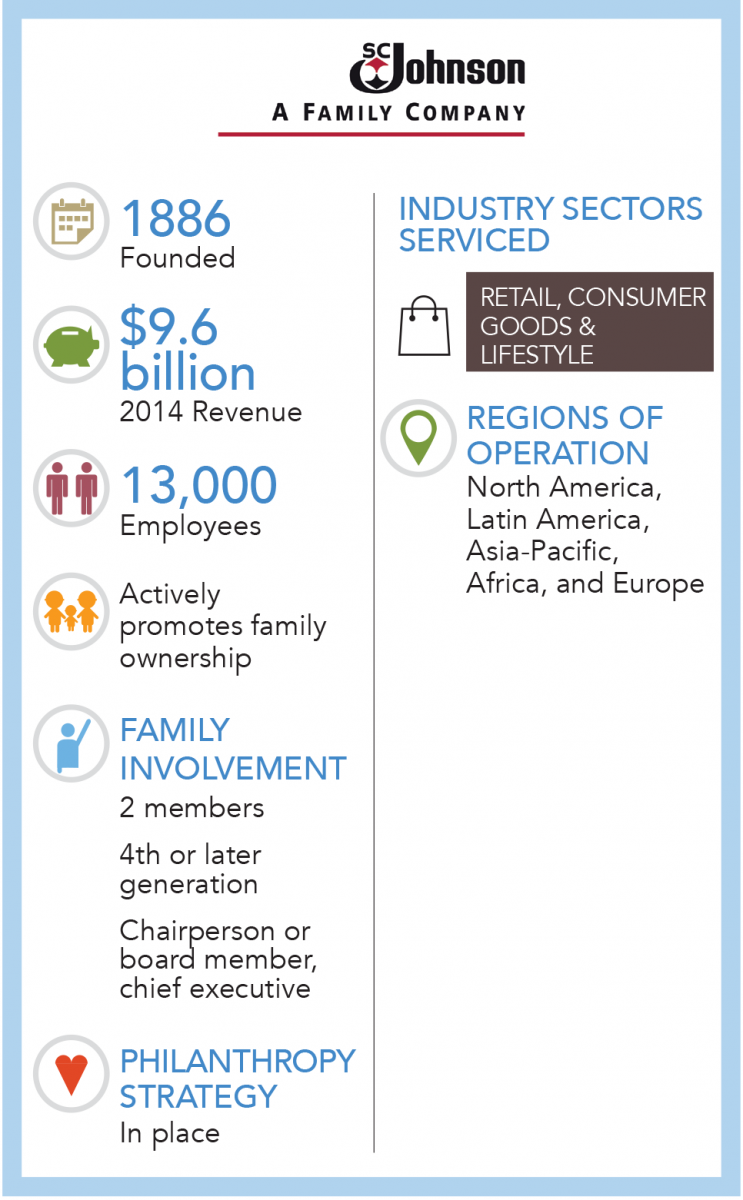 This company remains headquartered in the town where it was founded in 1886 when Samuel C. Johnson bought a flooring company and, two years later, launched a wax floor-care product. Now run by his great-great-grandson, H. Fisk Johnson, SC Johnson produces myriad products for household cleaning, pest control, automotive cleaning and shoe care, among them well-known names such as Mr Muscle and Glade. There are around 13,000 employees, annual turnover stands at $9.6 billion, the company has operations in about 70 countries, and sells products in many others. SC Johnson has long highlighted its environmental credentials, especially by eliminating harmful ingredients from its products. 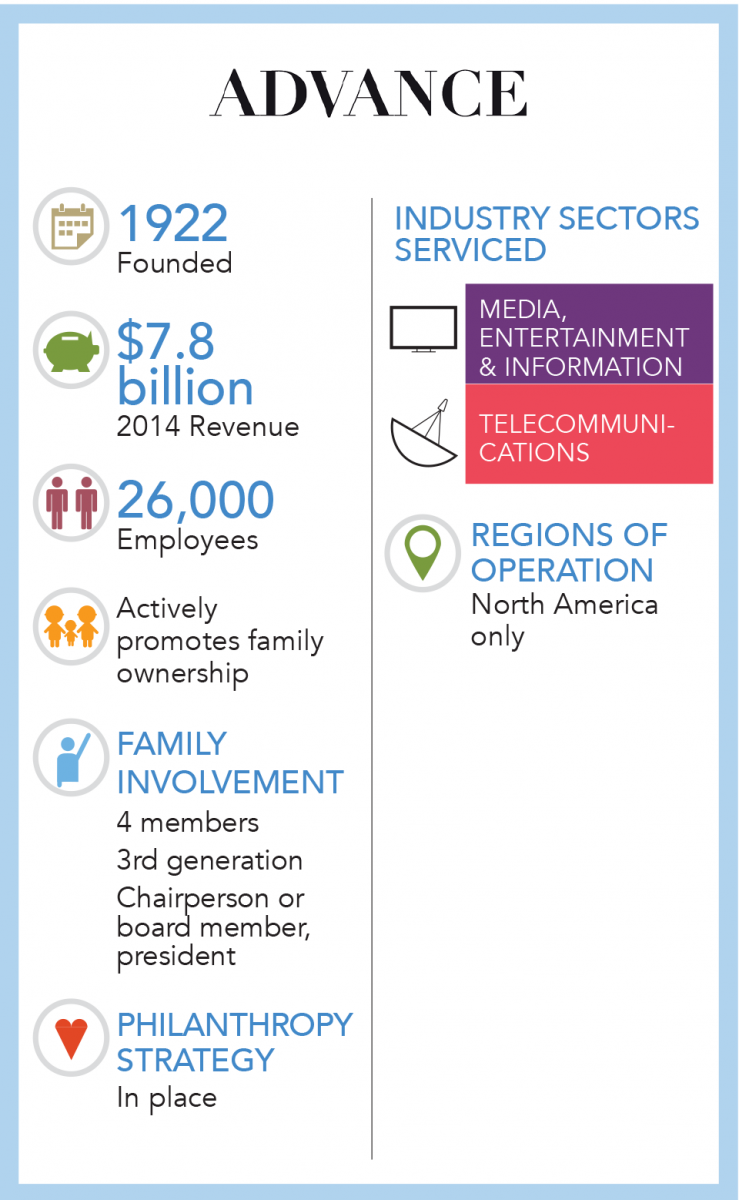 Founded in 1922 by Samuel Newhouse, this holding company owns some of the world’s best-known magazines – including The New Yorker, Vogue and Wired – as well as newspapers, websites, television stations, and other media outlets. Recording annual revenues of $7.8 billion and with 26,000 staff, the firm owes its strength partly to growth achieved by the founder’s sons, Samuel Irving Newhouse, Jr, a noted art collector, and Donald Newhouse. Donald’s son Steven, as chairman of Advance.net, has been a key player in the refocusing of the newspapers as digital-led operations, while, in 2015, the company made a multi-billion dollar deal to restructure ownership of television arm Bright House Networks.