Is two-headed leadership a realistic option for family companies?

Two-headed leadership can be defined as the capacity or art of leading a joint venture with two leaders who have equal conditions with respect to responsibility and participation in terms of decision-making power. Two-headed leadership can be defined as the capacity or art of leading a joint venture with two leaders who have equal conditions with respect to responsibility and participation in terms of decision-making power.

Two-headed leadership is often the formula chosen by second and third generations to oversee and run a family company. However, for this type of joint leadership to work effectively, specific attributes are required that tend to be uncommon in family organisations.

The key factor that will decide the success or failure of two-headed leadership is the leaders’ tendency towards competitiveness or collaboration.

In the case of competition-based two-headed leadership, they try to resolve the battle for power by reaching an agreement to alternate the position of chief executive: one year one of the siblings leads, the following year another takes the reins. This alternating system is the most common version of two-headed leadership, but also the most likely to fail. The different vision of each leader results in an inconsistent organisational strategy that will be equally unsettling for employees, clients and stakeholders.

This situation gets even worse when the competition between the leaders is aggressive and the sole objective of each leader’s annual management is to show that the previous management was wrong. Each family leader surrounds themselves by their own followers and the battle for power spreads throughout the whole organisation, leading stakeholders to lose confidence in the company and making it increasingly difficult to achieve the set goals. The leaders blame each other, meaning that there is little or no capacity for improvement. In the most extreme cases, unless a radical change takes place, this dynamic will result in the company closing down or, in the best-case scenario, being sold. 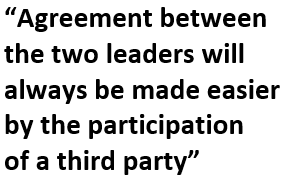 However, there are often cases in which this competition between the leaders is not so aggressive. In reality, for all practical intents and purposes, the result is pseudo-two-headed leadership. The leaders do not strive to alternate power and may even hire a consultancy to help them organise the tasks and define their roles. Nevertheless, in practice, the organisation is still under strain and the employees continue to receive contradictory orders. However, the business survives thanks to committed employees who are loyal to the founder’s culture and whose experience and tact have equipped them to survive in the situation of “schizophrenic communication” caused by pseudo-two-headed leadership.

At the other end of the spectrum, there is collaboration: joint leadership based on acceptance of the other leader, commitment, and mutual support, which requires them to put their egos to one side. This kind of leadership requires strong characters that know themselves and each other well, with a clear idea of their strengths and areas for improvement. They give their best to the relationship in order to help the other.

In such cases, reaching an agreement between the two leaders will always be made easier by the participation of a third party, who may be a brother or sister, a friend of the family or a board member who mediates or reconciles the interaction between the leaders.

Once the groundwork has been laid for such a dynamic in the second generation, it will be easy for the third generation to replicate the model behaviour of their predecessors. 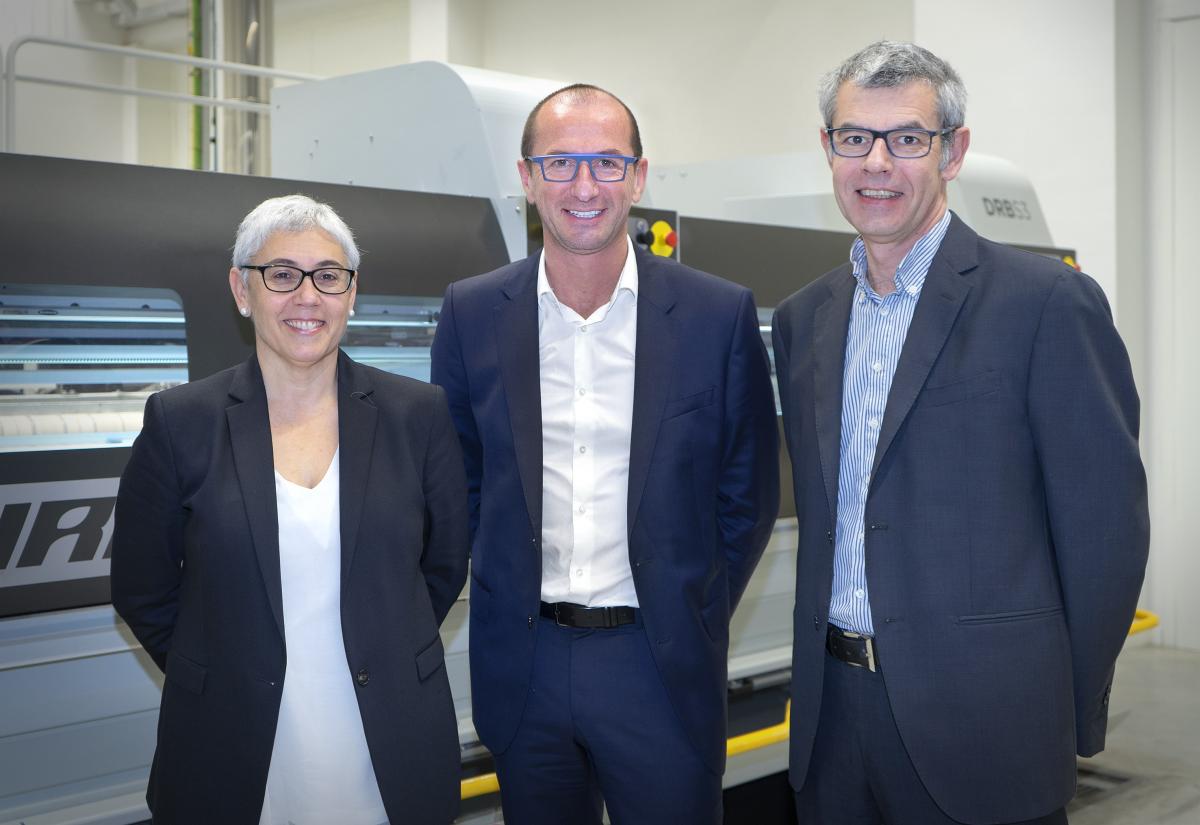 The successful family co-leadership of Girbau

One example of good practice with respect to two-headed leadership is the third generation of family leaders at Girbau, a family company dating back more than a century, specialising in providing solutions for the textile sector. Operating in more than 15 countries, Girbau has six factories manufacturing industrial washing machines, a workforce of more than 800 employees and a turnover in the midst of the pandemic of $127.7 million.

Pere and Merce Girbau (pictured, with Serge Joris as president, centre) are cousins from the third generation. They were co-chief executives for several years, before hiring an external general manager to facilitate the strategic boost that they have agreed to take. 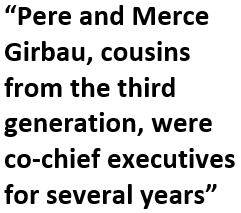 Both cousins simply had to continue the co-leadership formula established by their respective fathers. In fact, the secret to their fathers’ success as co-leaders was to manage Girbau as two completely separate companies. The production was overseen by Antoni Girbau (Pere’s father) and the commercialisation, by Pere Girbau (Merce’s father). Each brother was an expert in their respective area and responsible for making it run smoothly.

Moreover, they had complementary qualities which, according to other members of the family, was the key to the good relationship between them. Pere’s creativity for proposing new projects was challenged by Antoni’s critical thinking and realistic perspective. In fact, the family’s policy for carrying out a strategy or a new project was to reach a full agreement between the two leaders before starting. In addition, their co-leadership was complemented by the third sibling, their sister Teresa, who oversaw human resources and helped strike the balance between the two leaders.

Both Pere and Merce Girbau (third generation) took on the same roles as their respective fathers, thereby guaranteeing that the succession process replicated a well-established successful model. This continuity was reinforced by Merce and Pere’s experience, as they had attended board meetings since they were young. To take on the role of the third party to balance out the leadership of the two cousins, they hired an external general manager. 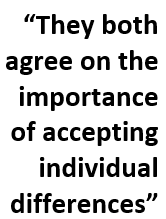 According to Pere and Merce, the value that underpins a successful two-headed leadership system is generosity and a feeling of serving something bigger than themselves. Moreover, they both agree on the importance of accepting individual differences, or, as they put it, “If we were exactly the same, one of us would be surplus to requirements”.

Lastly, another key factor in this relationship is letting the other do their thing, an attitude that is essential for fostering innovation. As long as it is aligned with the company’s strategic purpose, every new project at Girbau is carried out without either of the leaders vetoing it. As a result of this attitude, innovation, which has always been part of Girbau’s DNA, has reached its pinnacle in the third generation.

Nowadays, Pere and Merce continue their co-leadership from the corporate and family governance bodies, with the support of a non-family general manager who is responsible for overseeing and managing the day-to-day running of the company.

The case of the Girbau family shows us that two-headed leadership is possible, as long as it is based on a spirit of collaboration and generosity, complementary personalities and a third party who acts as a catalyst for synergies to overcome the differences between the two leaders.

Javier Macias is professor of Entrepreneurship and Family Business at EAE Business School and an active consultant, researcher and speaker.

He serves on advisory boards and family councils of several companies in Europe, South America, and Middle-East. He is founder of the think tank for family business advisers in Spain Club AEF and co-founder of the Ibero-American Virtual Study Group at the Family Firm Institute (FFI), where he is a fellow member.