Whisky and cognac: is it time for family office to toast to "liquid assets"?

Most people wouldn’t fancy tapping into a beverage bottled in the time of Napoleon, but the longevity of liquors means some of the rarer tipples can pull extraordinary prices among well-heeled consumers. When self-made Dutch millionaire Bay van der Bunt put his extensive cellar up for sale a couple of years ago, he shone a light on both the collectibility and the investability of rare liquors. His 5,000-bottle collection, said to be the world’s largest, included a cognac that had travelled with Napoleon’s army, and another from the Duke of Windsor’s Paris cellar. In all, it was valued at €6 million.

A sale to a single buyer was never announced, but van der Bunt has since sold off individual lots for substantial sums. An anonymous buyer paid him £19,000 (€24,000) for a 1789 half-bottle of AC Meukow & Co cognac. Harrods offered a full bottle of his Courvoisier & Curlier from the same year for £95,000. So there is value in old or rare bottles of liquor, which are changing hands at ever-higher prices, thanks to competition between collectors, investors and, often enough, well-heeled drinkers.

Some years ago, a guest at a Surrey hotel paid £32,000 for a bottle of 62-year-old Dalmore single malt whisky, drinking it there and then with his friends. Had he been an investor rather than a drinker, he would have harvested a generous profit. Only 12 such bottles were ever produced and six years later a Chinese businessman bought one for S$250,000 (£120,000) at a Singapore airport duty-free shop.

Collectors, of course, are interested less in impressing their drinking buddies and more in rarity, history and provenance. Cognac, with its long life and evocative historical associations, is highly collectible, and some old bottles can seem like living history. There is undeniable romance in an object that existed at, say, the time of the French Revolution. Van der Bunt’s collection includes whisky, port and Chartreuse but at its heart is cognac. 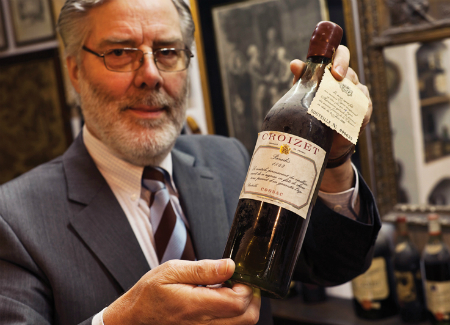 “It’s about passion,” says van der Bunt (pictured, right). “There is nothing else man-made in the world that’s this old that you can still eat or drink. That’s what makes it so unique.” One of the stars of his collection is a 1795 Brugerolle, in a hand-blown six-litre Imperial, specially bottled to go on campaign with Napoleon’s officers. The Dutch collector bought it for £20,000 in 1990 and it is now valued at £138,000.

“Any cognac with a date is sought after,” says Richard Harvey, global head of wine at Bonhams, the auctioneers. He adds that one of the most collectible vintages is 1811, a so-called ‘comet year’ – the appearance of a comet was thought to benefit the grape harvest. However, the age on some bottles can be misleading. Brandy kept in casks for long periods evaporates, and is regularly topped up with new spirit, making the “age” of the cognac something of a grey area. The French government outlawed vintage-dating for many years and, today, any distiller who wants to bottle a vintage cognac must keep it locked up from day one under official supervision.

“Early-landed” cognac is an exception. Certain British wine merchants and brewers used to import whole casks of young cognac to keep and bottle many years later. In the cool and damp British climate, the spirit didn’t need topping up and so the vintage was not compromised. Before the Second World War examples of these early-landed cognacs are very collectible. 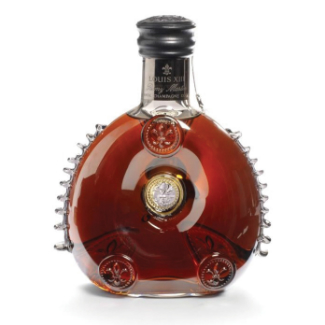 More contemporary creations, encasing old cognacs in new packaging, have become popular. A couple of years ago, a Baccarat decanter of Rémy Martin Louis XIII Black Pearl cognac (pictured, left) nearly doubled its estimate to achieve £10,350 at Bonhams. Today you can buy a bottle from a specialist retailer for $50,000.

The cognac market is “very buoyant” right now, according to Harvey, driven by growing interest from the Far East. Far Eastern buyers are also providing the backbone for the somewhat bigger and more visible market in rare whiskies. Bonhams now holds two dedicated whisky auctions in Hong Kong each year, as well as sales in Edinburgh and New York.


Here too the key ingredients are age and rarity – indeed, age becomes rarity. There are more than 90 working whisky distilleries in Scotland, and another 30 or more that have closed but whose product is still available. The growing taste for “single” malt whisky is a relatively new phenomenon and for many years most whisky was made to be blended, rather than bottled alone. For that reason, some older whiskies are only available in independent bottlings by specialists like Gordon & MacPhail or Cadenhead’s. But if it is available in an official distillery release, it’s worth more.

Vintages from the 1960s and 1970s or earlier are highly valued, because there are so few of them around. Single-cask whiskies (not vatted from a number of different casks) are very desirable and the value of cask strength whiskies – 50-60% alcohol instead of the standard 40% – is likely to appreciate more.

Given the number of distilleries and the growing number of individual releases, malt whisky is fertile ground for collectors. Some fall in love with one particular distillery and make it their mission to collect a bottle of everything it ever produced. Others zero in on a particular year – the year of their birth, perhaps – and try to find as many different whiskies from that vintage as possible. Yet others set out to round up a specimen from every known distillery.

“We are driven to collect by passion,” says Andy Simpson, an independent whisky valuer and consultant, and a collector himself. “And we are hoarders. We put the bottles on the shelf as something to look at and to show other people. But most collectors and investors also love whisky – I know of only one investor who doesn’t actually drink it.”

So Simpson, like many whisky collectors, buys two bottles of each – one to drink and one to keep. Others may add a third, hoping to sell it profitably at a later date and thereby cover their costs.

Compared to cognac, the whisky market is more focused on the nature of the spirit itself. “The main thing is the quality of the liquid,” insists Simpson. “You want to go for rare, limited editions from iconic distilleries.” 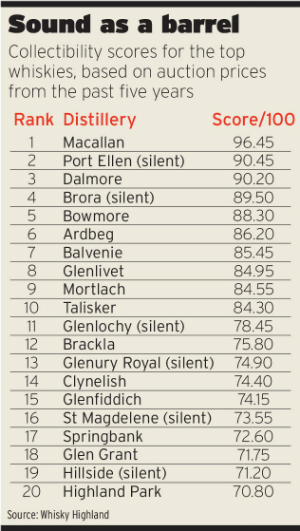 Now that malt whisky is big business, distilleries have been ferreting around in their cellars, digging out old casks of whisky, and dribbling them out into the market as “limited releases”, sometimes in extravagant packaging. Some investors have made money just by buying limited releases and flipping them for a quick profit. Macallan, the market’s undisputed chieftain, releases an annual Easter Elchies bottling, which is only available at the distillery. Last year people queued overnight to pay £185 for a bottle of 17-year-old Macallan. Not long after, retailers were offering them for £1,200 apiece.

It’s not always that easy. Some years ago, the respected Orkney distillery, Highland Park, released 200 bottles of a 50-year-old whisky in a showy sterling silver and glass bottle, priced at £10,000 each. But the secondary whisky market did not seem so easily impressed by the elaborate packaging, because some years later one made a mere £5,801 at auction.

Auctioneers are the hub around which this industry turns. Yet high transaction costs at the traditional houses coupled with growing international interest are fuelling a rise in online auctions. Three years ago, Glasgow-based Scotch Whisky Auctions started selling 100 bottles a month online, charging buyers and sellers 10% commission, against the traditional 25% buyer’s premium. Its latest auction featured 2,400 bottles.

“Just over half our buyers come from outside the UK,” says Scotch Whisky Auctions director Bill Mackintosh. “The market has spread to the US, mainland China and Taiwan.” In March, the house sold two unlabeled bottles from the SS Politician, which sank with its whisky cargo off the Hebrides in 1941, inspiring the book and the 1949 film of Whisky Galore. They made £12,050. Their previous owner had acquired eight of them for £4,000.

Just as the death of an artist immediately boosts the value of his oeuvre, so a distillery’s closure can increase the value of its surviving whisky stocks. Of course, the whisky, like the artist’s work, has to be good in the first place. Andy Simpson’s Whisky Highland collectibility index ranks individual distilleries in terms of the price gains of their bottles at auction. So-called “silent” distilleries take two of the top five places.

Leading the index, as ever, is Macallan, followed by Port Ellen (silent), Dalmore, Brora (silent) and Bowmore. These are the whiskies that everyone wants right now, and the ones that would have generated the highest historical returns for an investor. Successful investment in whisky is no easier than any other form of investment, though if you can pick the right bottles, there are clearly profits to be had.

Scotch is not the only game in town. Japanese malt whiskies have been winning gold medals in world competitions and their prices have been shooting up at recent Hong Kong auctions. A 1967 bottle from Karuizawa – a closed distillery – sold for $380 in 2009 but now fetches $3,500, and a bottle of the 1968 recently sold for $6,000. Ichiro’s extraordinary 52-part malt Card Series features a different bottle for each card in the pack, and a set of 13 was bought for $12,600 in Bonhams’s November Hong Kong sale. In the wider world of liquor, vintage Chartreuse has a following, with some collectors especially keen on bottles made after its French monks fled to Tarragona in 1903.

Tastes vary from country to country. Rum and tequila attract collectors in the Americas but not particularly in Europe. That said, 12 bottles of 1780 rum, thought to come from Barbados and found in the cellar of a stately home near Leeds, fetched £78,255 at auction last December. They had been expected to raise £12,000. Investability meets collectibility once again.