The Mexican economy may long have had difficulties in achieving brisk growth, but that has not stopped the nation’s largest family businesses from forging ahead and, in some cases, becoming world leaders. Daniel Bardsley takes a look at this land of extremes and where families fit in. The family business dominates the Mexican economic landscape—an often-used motto in the country is “You trust your blood”—but few nations have such a gaping divide between the large and the small.

At one extreme, Mexico has millions of under-the-radar micro-businesses keen to avoid the attentions of the tax collectors, while at the other it plays host to corporate family-controlled giants that are at the global cutting edge.

Many industrial sectors in the country are dominated by a particular family, something that historians have attributed to practices dating back to the Spanish empire of the 1700s. Today, among the world’s top 500 family businesses in the University of St Gallen’s Global Family Business Index, 14 are Mexican, and family-controlled concerns loom large in the Mexican Stock Exchange.

Chief among them is América Móvil, part of the empire of Carlos Slim, Mexico’s richest man and someone who, for several years, was ranked the world’s richest person.

Such successes stand in stark contrast to the micro-businesses, the stagnant productivity of which has been blamed for the long-running underperformance of the Mexican economy as a whole. The “Mexican Miracle” is now a decades-old memory.

When it comes to publicly owned family-founded companies, family members often enjoy an outsized share of the voting rights and seats on the board.

“If it’s comparing Latin American versus American, there’s great emphasis on family relationships and a strong expectation that it will be family members on the board,” says Dr Allan Discua Cruz, a lecturer in the Management School at Lancaster University in the United Kingdom, who has researched family businesses in Latin America.

Reports have said that the lack in many large Mexican family-owned companies of what is often considered international best practice, and the absence of corporate governance reforms, has discouraged foreign investments in the country’s listed companies.

Cruz highlights, however, that many of the region’s family-controlled multinationals have much that is worthy of praise.

“They look after not only the family members, but the employees… They’re very much engrained in the culture.” 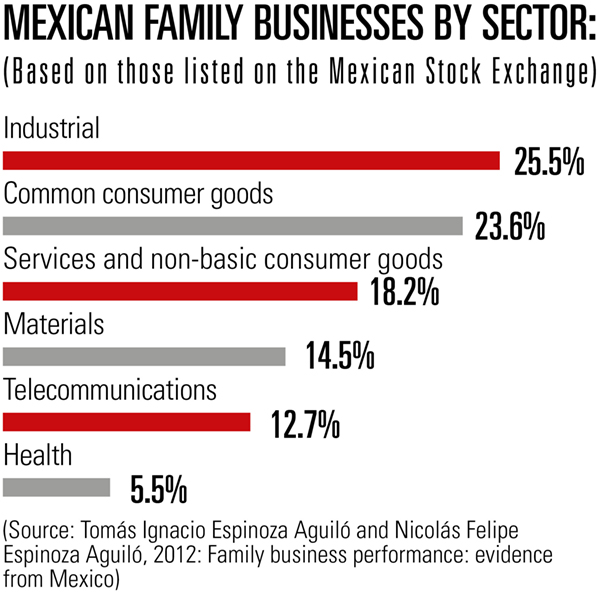 And there are major family-controlled companies in Mexico that have earned praise for their corporate governance, among them the global bakery producer Grupo Bimbo.

Also, among later-generation family members at Mexican family firms, the importance of best practice is widely acknowledged to be growing, helped by the fact that many have been educated overseas.

The general political and economic character of Mexico, a country acknowledged to have problems linked to corruption and nepotism, has knock-on effects that impact all family businesses and go beyond the obvious issues, such as having to deal with a corrupt bureaucracy.

A weaker regulatory environment encourages a climate in which partnerships develop between executives who are well known to one another.

Meanwhile, published figures indicate that as many as six in 10 of the country’s workers earn their living in the informal economy, which the World Bank estimates accounts for 30% of the country’s economic activity.

Indeed many small family businesses are keen to remain modest in size so that they can continue to operate within this informal economy and avoid having to pay taxes.

This places a strain on the country’s largest family businesses, since the formal economy has to bear a greater burden than would otherwise be the case. Corporate tax rates are 30%, which is higher than the average for Latin America, not to mention Europe or Asia.

In a 2017 academic paper, Family Businesses in Mexico, published in the journal Revista Espacios, Dr Jorge Alejandro Silva Rodríguez de San Miguel noted that a wider tax base—meaning the bringing in to the formal economy of those many informal small businesses—would help the country’s medium and large family businesses.

However, this is unlikely to happen, as the cost of doing this would be high relative to the tax receipts the government would achieve, and officials are wary of cracking down on activity that provides vast numbers of jobs.

Silva Rodríguez de San Miguel is keen for more of the largest Mexican family firms to become listed, as this could promote best practice in management and encourage transparency.

Mexico is not an easy place in which to turn a profit, with Silva noting that the experience of multinationals indicates that higher levels of investment are required in the country than is the norm elsewhere.

So the challenges in Mexico facing large family businesses—and other organisations—remain high.